2007 warmest year on record? Coldest in this century

An error in RSS data has been identified by John Christy and Roy Spencer, competitors from UAH... It may influence the text below.

2007 remains the coldest year of the century according to HadCRUT3 weather stations.

One month ago, we noticed that November 2007 was the coldest month since January 2000. Well, the RSS MSU satellite data prepared by remss.com show that December was even cooler. The December anomaly was -0.046 °C, compared to -0.014 °C in November. That means that December 2007 was also cooler than the average December from 1979. Moreover, we can finally complete the ranking of the years!

Let me start with forecasts in the mainstream media.

In January 2007, we were informed that 2007 was either likely or certain to surpass 1998 and become the world's warmest year on record by most media, including:

as well as virtually all other media you know. They justified this statement by referring to scientists who have combined greenhouse gases with the observed El Nino. Many sources, such as the New York Sun, even gave you the probability that 2007 would be the hottest year as 60 percent. They immediately added that this should "add momentum for the next phase of the Kyoto protocol", a comment that clarifies what is the actual goal of many of the people who study these questions professionally.


In the middle of the year when it started to be clear that the prediction was bogus, Phil Jones (Reuters) changed his mind only infinitesimally. It would be the second hottest year, he said. These big-shot agenda-driven scientists never have the courage to say that they were simply wrong.

However, the greenhouse gases are not too important and El Nino was replaced by La Nina. As a consequence, RSS MSU data for the lower troposphere (graph, more graphs) show that 2007 was the coldest year in this century so far. In alarmist jargon, it was the ninth hottest year on record: the most recent year was cooler than all other years in this century as well as 1998 (by a whopping 0.41 °C) and even 1995 (do you remember Summer Nights 95?). According to different datasets (HadCRUT3, UAH MSU, NOAA), the year is going to be approximately the 8th (HadCRUT3, final) or 7th (NOAA) or 6th warmest year. UAH reports 2007 as the 4th warmest year (on 1/7/2008: final, just by 1 millikelvin warmer than 2006) but it is probably because of the diurnal drift that has recently become obvious (see also World Climate Report). When it is corrected, it is likely that UAH will be rather close to RSS.

GISS became a kind of exception (1/8/2008: final) because the 2007 temperatures exactly matched those of 1998, their 2nd or 3rd warmest year (as James Hansen said a few weeks ago, with 2005 being their hot king) - but it is still very far from the hype about the hottest year. Your humble correspondent is not the only one who believes that the satellite measurements such as RSS, UAH are more accurate than GISS, HadCRUT3. It just happens that HadCRUT3 is closer to RSS than UAH to RSS, as far as the recent rankings go.

The RSS MSU linear trend extracted from the 1998-2007 interval is -0.48 °C per century of cooling! Numerically, it's almost the same trend that we assign to the 20th century but with the opposite sign. The RSS MSU data imply that 2007 was 0.12 °C cooler than the already cool year 2006. Other teams will generate qualitatively compatible results but substantially different numbers, raising doubts about the reliability of the temperature measurement even in the modern era. 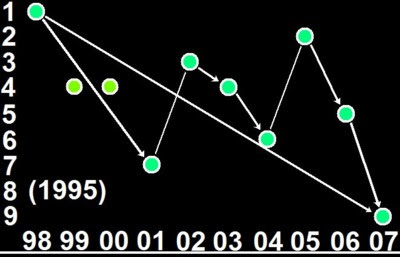 Figure 1: Global cooling. Nine hottest years on record as shown by the RSS MSU calculations, from the hottest year 1998 to the coolest year 2007.

The choice of 1998 as the beginning of this graph is, of course, a P.R. trick to make the trend look as cooling as possible. If someone chooses e.g. a year in 1970s - the coldest year in the last 70 years - as his beginning, it is a P.R. trick, too, even though the goal has the opposite one. Certain qualitative conclusions simply depend on these choices and one must be careful about this fact. Similar issues are also discussed in the fast comments. Moreover, I only included the last 10 years for efficiency because typing three times as many numbers to the Excel file would be rather tiresome. Incidentally, if I wanted to demonstrate recent global cooling, I could have been even tougher and show you 36 months since January 2005, including the linear regression: 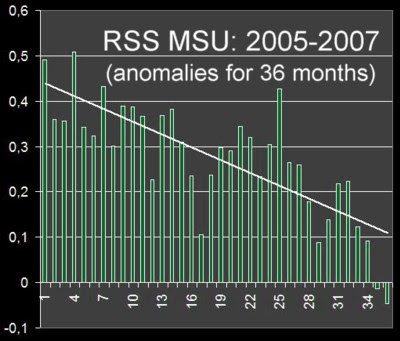 Let me emphasize that if someone thinks that the "ninth hottest year" is still hot, it is of course an irrational reaction. The global mean temperature is a continuous function of time and is auto-correlated. It follows that a short time after what has been identified as the hottest instrumentally measured years, we can't abruptly return to years as cool as 1850 or 1660. The laws of mathematics just make such a possibility extremely unlikely.

Let me offer you a metaphor. Imagine that all newspapers in the world would cite "experts" and predict that Nico Rosberg would almost certainly win in the Formula One 2007 season. However, the first three drivers would be Räikkönen, Hamilton, and Alonso while Rosberg would be ninth. Would the readers appreciate the "expert" who would just decide that Rosberg was the best guy? It would be an entirely foolish prediction. Why is the climate so different?

Do you expect the media listed above to apologize for the misinformation they have printed? Do you think they will tell their readers and audiences that they have made a mistake and reported scientifically unreliable and unlikely propaganda created by political activists and hacks such as Phil Jones? Do you think that they will promise us that they will be more careful in the future and avoid this kind of hype? If you do, you haven't understood what religious bigotry and special interests really mean. Most of these people are either lunatics who pay no attention whatsoever to reality, the actual data, or serious science, or corrupt people who greatly benefit from this big-scale misinformation and propaganda. 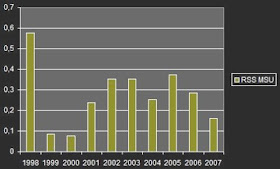 Here is the Google Docs spreadsheet with the complete 1998-2007 monthly data of RSS MSU and nearly complete data from four other teams (HadCRUT3, UAH MSU, GISS, NCDC NOAA) that will release their December data in a few days or weeks. You may also download the Excel file. The World Meteorological Organization publishes their data as an average of HadCRUT3 and NOAA: you can do the math to predict their results, too: for WMO, the year will be either 7th or 8th warmest year.

Phil Jones et al. now forecast 2008 to be even cooler than 2007 (sanely, due to La Nina that will strongly affect at least the 4 following months) but they present this prediction as perfectly compatible with "underlying global warming" that is not "waning" in any way, despite the observed cooling. It seems obvious that the mysterious "underlying" numbers are more important for them than the numbers that are being actually measured.