0:50 I waited until the Sir
creates some space for my car.
I wanted to put my car
there. Everything's behind me.

1:15 When the man left the place
we got some time for a revenge.
I walked around his car with
a quarter dollar coin.

1:24 But he was lurking [behind the corner]
waiting how I would behave.
He walked across my roof
and ruined my [lovely] car.

1:32 I had no longer mood for his jokes.
I saw darkness in front of my eyes.
I kicked both head-lamps away from his car.
The bodies were atop of one another.

1:48 And so a head physician from a hospital with a math professor
were rolling on the road without any fuss.
Both older men as soon as they were arrested
rightfully have earned almost the same sentence.
Songwriter, composer, and comedian Ivan Mládek has been one of the heroes of my childhood and I still enjoy his work (as I told him a month ago during a Christmas party; he was also a classmate of President Klaus). He has written hundreds of funny songs and I have memorized most of them. However, "Koukejte vycouvat" (Back Your Car Out Of Here) above has been one of my favorites. For amateurs, I find the LEGO videoclip by Mr Big Stalk and Mr Little Stalk (Košťál and Košťálek) rather impressive. 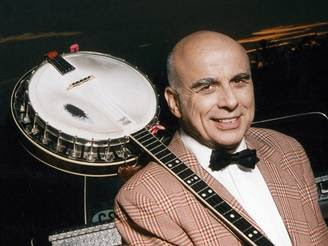 Another huge hit was "Jožin z bažin" (Josh from the Swamps), the Lumo #1 hit of 1978 and 1979, that I also offer you in a LEGO version; see also a videoclip with Ivo Pešák's Parkinson with Polish subtitles. Right now, thirty years after it was written (for one bottle of alcoholic beverage), it is becoming a successful hit in neighboring Poland and the YouTube video in the previous sentence has over 1 million of Polish visits. Another million has visited copies of the same video. And it is number one on Polish radios; see Polish TV.

I don't fully understand the dynamics behind this development but the Poles must find not only Ivo Pešák's dancing but also the Czech language very funny, maybe even more funny than the Polish language is for the Czechs.
Luboš Motl v 7:28 AM
Share