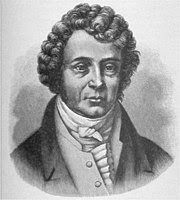 André-Marie Ampère was born on January 20th, 1775, in Lyon, France, to a family of a rich and smart merchant and a pious mother. He was a child prodigy who lived in a nearby burg. André-Marie was able to resum long arithmetic series using pebbles and biscuits before he knew the figures.

His father wanted to teach him Latin but it was realized that the boy prefers maths and physics. Nevertheless, André-Marie had to learn Latin soon, in order to read the papers by Euler and Bernoulli. ;-)

In 1796, he fell in love with a very religious woman, Julie Carron, who was from the working class and they married in 1799. However, two years later, he moved to Bourg, to earn some money for the family as a professor, leaving his ailing wife and son (later, French philologist Jean-Jacques Ampère) in Lyon. Sadly, she died in 1804 and his heart was broken forever. Exactly when she died, he copied a touching verse from the Psalms and started to read the Bible and the Fathers of the Church more regularly.

When he was 18, he quoted the following three events as the key to his life: his first holy communion; the reading of "Eulogy of Descartes" by Thomas; and the taking of the Bastille.

Jean Baptiste Joseph Delambre was impressed by Ampère's probabilistic analysis showing why the gamblers always win in the long run and he made sure that Ampère stayed in physics. What did Ampère do on September 11th, 1820? No, he didn't fly into the World Trade Center and he didn't defend his PhD thesis. Instead, he heard of Hans Christian Ørsted's strange new phenomenon: a magnetic needle moves when there is a voltaic current nearby.


It took him one week, until September 18th, to write a nearly perfect paper about the phenomena that was more general and to present it to the Academy. His work also showed that parallel wires with currents attract or repel each other and the full equations followed abruptly. Just to remind you, during the following years, he made some experiments and realized that

the contour integral of the magnetic field B around the wire is equal to the total electric current through the loop. You have to respect the right hand rule. Both sides of the equation are dimensionful and you may guess how the unit is called: one ampere.

In differential form and SI units, the law says that

I didn't want to confuse you so I have also added the displacement current (the time derivative), the only real contribution of James Clerk Maxwell to the individual Maxwell's equation.

Note that Ampère's law was the first quantitative law describing a relationship between electricity and magnetism. Faraday's electromagnetic induction experiments came 11 years later, in 1831. So Ampère is the man who really started to study electromagnetism as a theory. Moreover, he gave us one more gift related to this important discipline: he gave it its seemingly modern name, electrodynamics.

Ampère died in Marseille and is buried in Paris. He was a very amiable and child-like character, a teacher and an Inspector-General of the University, but he has also established electrodynamics as a theoretical discipline and wrote sophisticated essays on calculus, curves, light, zoology, psychology, and philosophy of science and knowledge.
Luboš Motl v 8:25 AM
Share