Gustáv Husák, the last communist of Czechoslovakia, would celebrate his 95th birthday today. Before the Velvet Revolution, this anniversary would be written in calenders. ;-) 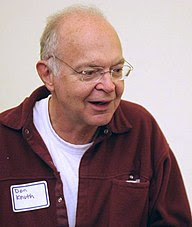 However, today we are free to celebrate the 70th birthday of someone else, namely Donald Knuth, a professor emeritus of computer science at Stanford and the author of TeX, METAFONT, and the shape of every character in the Computer Modern typeface family.

Knuth systematized the techniques for the analysis of complexity of algorithms and he has written - and is still writing - many books and papers about it. But theoretical physicists and mathematicians primarily know him as the father of TeX. Many of us have written dozens or hundreds of papers and books using his typesetting system. I've known several people who viewed TeX as a religious symbol of perfection. People who prayed to TeX.

The approach of Donald Knuth himself, who is a Christian, is not too different. The current version of TeX is something like 3.141592653589793238462643383279 and the newest version of METAFONT, a vector system to draw letters and fonts, approaches "e" in a similar fashion. Moreover, Knuth pays one hexadecimal dollar (USD 2.56) for a typographical error or a mistake found in his books. The Wikipedia page about him has collected many more jokes like that.


The very idea of TeX as a generalization of text with added commands and symbols is a cousin of many other frameworks in the contemporary computer industry, including HTML and XML. The output of TeX looks great. At the same moment, I feel that the features of the system are somewhat technologically limited and the exact science community could try to switch to something more modern, and something more compatible with the internet browsers, search engines, symbolic computational software, and communication gadgets.

Is there someone as brave as Donald Knuth in the world to develop a new up-to-date system to deal with text rich in mathematics?
Luboš Motl v 7:42 AM
Share