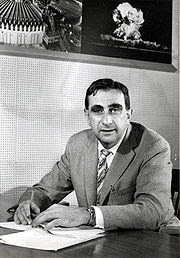 Budapest is the capital of what European country?

When he was young, he had to witness a lot of revolutionary mess in Hungary which made him realize that both communism and fascism were dangerous crap. His PhD thesis under Werner Heisenberg in Leipzig was one of the first accurate solutions of the H2+ ion.

George Gamow and Lev Landau became his friends in 1930. Teller's friendship with Czech physicist George Placzek was very important for his interests in nuclear physics. For example, Placzek arranged a summer stay in Rome with Enrico Fermi for Teller.

In 1933 he managed to escape Germany. Teller spent some time in Britain and Denmark (with Niels Bohr). He married Mici Harkanyi, a sister of his friend. Their son born as Raymond Joseph Teller (now just Teller) is a magician. In 1935, Gamow drafted Teller to the U.S. He did all kinds of molecular quantum physics but once fission was discovered in 1939, his interests focused on nuclear physics.


The Manhattan project and beyond

Teller was somewhat upset that Hans Bethe and not him was chosen as the director of the theoretical division of the Manhattan project. Because he was also bored by the ordinary fission bomb, he refused to calculate the implosion of a fission bomb and pursued Fermi's rough idea of a "Super" which is how he called the Hydrogen bomb. They had to find someone else to calculate the implosion: it was Klaus Fuchs, a skillful physicist who later turned out to be a Soviet spy. Not too great a job, Edward. :-) Nevertheless, Teller has made some contributions clarifying the implosion mechanism.

A two-minute interview with Teller about Roosevelt, Hitler, and freedom

Teller was overly optimistic about an obsolete type of the H-bomb in 1946. But in 1950, after the Soviets succeeded in creating a fission bomb, Truman ordered his scientists to develop the fusion bomb. Teller returned to Los Alamos. Teller was surrounded by pessimistic scientists who would think that the fusion bomb was infeasible - a fact that apparently drove Teller up the wall.

After some wrong designs had been shown flawed, Edward Teller and the Polish mathematician Stanislaw Ulam proposed the Teller-Ulam design in a paper. And it worked. Teller argued that Ulam has made no contributions and that Ulam didn't even believe the content of the paper. Others dispute this statement. Teller wanted more money for military research (especially the theorists) while Bethe didn't. So Bethe emphasized that the H-bomb was due to Teller's ingenious mind, not a result of funding. ;-)

In this fun and musical 3-minute documentary about the very large bomb, they also say that the rough idea about the combination of fission and fusion bombs was due to Ulam. It was actually Fermi's idea.

The details of the design remain classified as of 2008. Many historical questions, e.g. whether Andrei Sakharov et al. created the Soviet H-bomb independently or whether they analyzed the fallout from the U.S. explosion, remain uncertain, too. In 1955, Teller was effectively forced to publish an article called "The work of many people" in Science in order to calm down his jealous colleagues. Later, he described the article as a "white lie to soothe ruffled feelings" and claimed full credit for the invention.

The authorities agreed with Teller who became a pariah in the scientific community and a darling of the conservative politicians and pundits in the U.S. and Israel (via Yuval Neeman). It seems clear today that Teller wanted to sink Oppenheimer and become the U.S. nuclear boss instead of him.

In the 1960s, Teller tried to work on supersafe nuclear reactors and fought against proposed nuclear test bans. He was inventing various peaceful projects based on nuclear explosions - building harbors or extracting oil. He was named Director Emeritus of the Livermore Laboratory and a Senior Fellow at the Hoover Institution.

In 1979, Jane Fonda (pictured), Ralph Nader, and similar anti-nuclear fanatics made Teller suffer a heart attack because he had to undo the damage they did on the public perception of the nuclear technologies which was a lot of work. In the 1980s, he was a big champion of Reagan's star wars. After the collapse of communism in 1989, he was excited about the developments in Hungary. In 2003, two months before he died in Stanford, Teller was awarded with the Presidential Medal of Freedom by George W. Bush.

Edward Teller's most famous student was Chen Ning Yang, a co-father of Yang-Mills theory, Yang-Baxter equation, and the Lee-Yang parity violation. At the age of 82, Yang learned mirror symmetry because his new fiancée was 28. ;-)

In the essay about John von Neumann, we discussed his projects to artificially warm up the Earth by a few degrees by coloring the polar ice caps which might be great for life on this planet. Like most great minds, Edward Teller was a climate skeptic, too. In 1997, he wrote that the jury was still out whether the greenhouse effect contributed to warming. But he proposed a simple solution that would only cost USD 1 billion a year, roughly 500 times less than Kyoto-protocol-style approaches. Click the previous link to learn more.
Luboš Motl v 7:52 AM
Share