The Holy Father was expected to give a speech at the Rome University that would start the new academic year. As

describes, the Pope eventually cancelled his visit after a protest of 67 professors, led by Emeritus Professor Marcello Cini, who didn't like the fact that in 1990, Cardinal Ratzinger supported the following quote by Feyerabend:


In the age of Galileo the Church showed to be more faithful to reason than Galileo himself. The trial against Galileo was reasonable and just. 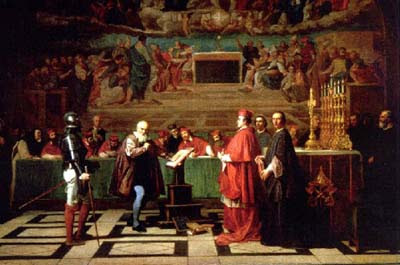 Galileo at the process of the Inquisition

I recommend you to click the picture above and read a page that tries to defend the Church against Galileo. For example, it mentions the opinion of Italian journalist Vittorio Messori:

Galileo was not condemned for the things he said, but for the way he said them. He made statements with a sectarian intolerance, like a ‘missionary’ of a new gospel …. Since he did not have objective evidence for what he said, the things he said in his private letters to those men [of the Roman College] made him suspect of dogmatism supporting the new religion of science. One who would not immediately accept the entire Copernican system was ‘an imbecile with his head in the clouds,’ ‘a stain upon mankind,’ ‘a child who never grew up,’ and so on. At depth the certainty of being infallible seemed to belong more to him than to the religious authority.

Also, Galileo is criticized for the fact that the boundaries between religion, philosophy, and science were fuzzy in the 17th century. I doubt it was Galileo's fault and I don't really care whether Galileo's teaching was a new religion, new philosophy, or new science. I think it is much more important that he was right and his wisdom turned out to be essential for the development of our civilization. I happen to care about the fact that Galileo was infallible in the fundamental questions, unlike the religious authority. This fact introduces a certain asymmetry and the asymmetry might lean to the opposite side than the side that Vittorio Messori would like.


Note that Galileo Galilei's description of the crackpots of his time is almost identical to your humble correspondent's favorite words about the contemporary heirs of the Inquisition - I mean the imbeciles who irrationally criticize string theory today and who are trash upon mankind and childish simpletons who haven't grown up. Well, let us admit that great minds think alike. ;-)

Analogously, Vittorio Messori's criticism of Galileo who "didn't have objective evidence" is almost identical to proclamations of individuals such as Peter Woit. Tiny minds think alike, too. :-)

With all my respect to the Pope's intellect, his conservative values, hypothetical links to the Creator ;-), and the traditions and security he represents, I think that Galileo's approach was indeed a new kind of reason and a new religion that we call "science" today. Science as outlined by Galileo was a new religion and it is a good thing, too. The obsolete religious bigots who were so colorfully and so rightfully criticized by Galileo always behave in the same way. They haven't changed much.