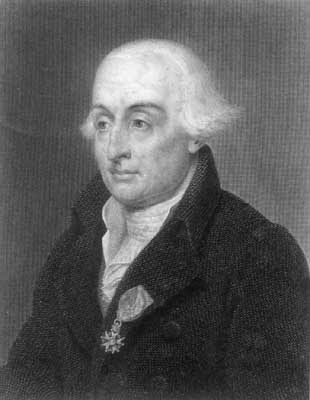 Joseph Louis, comte de Lagrange, an eminent mathematician and a tragic figure, was born on January 25th, 1736, in Turin as Giuseppe Lodovico Lagrangia. His father was a rich manager of the funds of the Sardinian royal army.

He only began to be interested in maths at the age of 17. However, two years later, he wrote a letter to Euler in which he solved the isoperimetrical problem (finding a curve minimizing [thanks, Carl] the perimeter, given a fixed area inside; the solution is clearly a circle but he gave a proof) using variational calculus. Let us say it bluntly: he used a kind of Lagrangian approach. ;-)

Euler and Lagrange: the leaders

Leonhard Euler, a fellow string theorist, instantly understood that Lagrange's methods were important. Euler generously withdrew his own, more primitive paper about similar issues, allowed the young Italian guy to take the full credit for his discovery, and even invented a catchy name for Lagrange's techniques. Lagrange instantly became a celebrated mathematician: only Euler was above him.

Despite Euler's generosity, we still usually talk about the Euler-Lagrange equations that physicists usually derive from "delta S = 0".

At the age of 22, Lagrange established a society that later evolved into the Turin Academy. During this period, he published some papers. One of them found an error by Newton in acoustics. Another paper solved the transverse vibrations of a string, making Lagrange another 18th century string theorist. Add some extra work on physics of sound, probability theory, recurring series, and variational principle.

Later, Lagrange explained why we still see the same side of the Moon. He studied a lot of details in celestial mechanics and reinterpreted Newton's mechanics in the abstract Lagrangian fashion that later became crucial for Feynman (and Dirac) to discover the path integral approach to quantum mechanics.

Lagrange also coined an "infinitesimal" approach to calculus - one that directly assumes the existence of infinitesimal numbers and avoids epsilons and deltas - but his approach was heuristic at that time and was only recently made rigorous (and has previously led many sloppy people to errors). He was a perfectionist teacher and typo-free author of papers.

Many things are called after him, including Lagrangian mechanics, Lagrangian, Lagrangian point, Lagrange multipliers, Lagrange polynomials, and at least five theorems: a theorem about the order of subgroups, the four-square theorem allowing all integers to be written as a sum of four second powers, a theorem about the number of solutions mod p of algebraic equations in number theory, inversion theorem calculating Taylor expansions of inverse functions, and reversion theorem for expanding functions given implicitly.

Lagrange's health was never great and the mental part of these difficulties helped him to die at the age of 77. Also, he tried one unhappy marriage, just to be like others, and another happy marriage with a young woman who was feeling very compassionate for him.
Luboš Motl v 4:42 PM
Share