Lev Landau was born 100 years ago 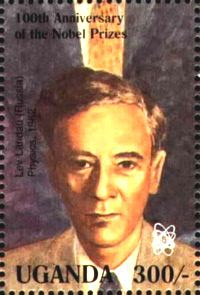 Lev Davidovich Landau belongs to the second category because he was born on January 22nd, 1908 into a Jewish family in Baku, Azerbaijan, Russian Empire, to become the most stellar Soviet and Russian physicist of his century.

Two more years later, the Rockefeller Foundation teamed up with Stalin's government and allowed him to visit Göttingen, Leipzig, and especially Copenhagen: Landau always considered himself to be a pupil of Niels Bohr. In 1930, he became a friend of Edward Teller, among others. Landau traveled to Cambridge and Zürich before he returned to the Soviet Union, to lead theoretical physics in Kharkov, Ukraine.

Physics Today: a family portrait of Lev Landau by his niece

One of his mottos was versatility. His students had to pass the "theoretical minimum" that covered all aspects of theoretical physics and only 43 candidates ever passed. I pretty much agree with this philosophy and I would say that I have passed an equivalent of it. In this way, the students may become more than narrow specialists.


Mr Jozef Kvasnica, an old physicist we knew from Prague when I was an undergrad, studied in the Landau school and he was a source of humor as well as interesting stories about Landau. For example, when Kvasnica first arrived to the institute, he met a janitor or someone like that in the corridor.

The janitor, while cleaning the floor, already informed Kvasnica that they had tough tests and just for fun, he gave Kvasnica these tests to solve them. We were explained that Kvasnica succeeded and the janitor turned out to be, of course, Landau himself. :-)

In Kharkov, Landau started to write his ten-volume Course of Theoretical Physics with Evgeny Mikhailovich Lifshitz, his friend and former student. Decades ago, I studied these texts and liked them a lot. They're very well structured into sections and each of them has a well-defined result. Recommended.

Incidentally, Landau didn't have too much respect for bad physicists, as the following true and cute story about a predecessor of Lee Smolin shows:

In the Physical Technical Institute in Kharkov where Landau was working some time, there was one vain and mediocre but prolific physicist who made his research mostly by the method of plagiarism. One day he received a telegram which said that he is nominated for Nobel prize and therefore he should prepare a corpus of all his papers in the typewritten form in two copies (by the way, it was before the era of computers) and submit them to the head of Department of Theoretical Physics (which Landau was) with deadline of April 1st.

The poor man lost his mind and did not pay attention to the dubious date. He began to feel very important and stopped to say "good-day" to his old friends. He accomplished the great task of typewriting the corpus in time and laid it on the Landau's table only to be met by the question: "Did you really believe that Nobel prize could be given for this trash?"

As you can see, Landau was not too different from Wolfgang Pauli. So what happened when these two guys met? Well, you know Pauli...

Landau who treated everyone else as a fool found his match in Pauli. After explaining his work to a skeptical Pauli, he angrily asked whether Pauli thought that his ideas were nonsense. "Not at all, not at all," came the reply. "Your ideas are so confused I cannot tell whether they are nonsense or not."

During the Great Purge, he was arrested in an NKVD prison in 1938-1939 for 367 days, instead of those 10 years he was supposed to waste as a potential German spy. Pyotr Kapitsa finally wrote a letter to Stalin, personally vouching for Landau's behavior. In 1962, Landau's car collided with a lorry. Landau's importance was so high that the Soviet officials instantly brought an airplane with a top brain surgeon from the imperialist U.S. Nevertheless, Landau's head and mind never quite recovered and he died six years later.

Landau has never cared about politics much but the following authentic exchange with the notorious agronomist Lysenko, a darling of the communist party, at the session of the Soviet Academy of Sciences is very funny:

When Lysenko's report was over, Landau asked: So, do you argue that if we will cut off the ear of a cow, and the ear of its offspring, and so on, sooner or later the earless cows will start to be born? - Yes, that's right. - Then, how do you explain that the virgins are still being born?

If you really need a hint to get the point of this sensitive joke, supplement the last question from Landau with "even though we f*** them generation by generation". ;-)

Landau liked to rank physicists on a 0-5 logarithmic scale. Achievements

Landau's achievements cover many areas of theoretical physics. For example, his 1962 Nobel prize was awarded for his theory of superfluids, relevant for Helium II (He 4), that he wrote down as early as in 1941, together with an explanation of the roton spectrum.

Well, he has done many important things earlier and many more things later. Concerning the first category, he discovered the density matrix approach to quantum mechanics in 1927, independently of Felix Bloch and John von Neumann.

In 1930, he has figured out the right quantum theory of diamagnetism for materials whose magnetic permeability is smaller than one (a kind of imperfect superconductors), something that is relevant whenever there are no stronger effects such as paramagnetism and ferromagnetism inside the material. As an undergrad, I didn't want to like condensed matter physics too much but I simply liked these kinds of derivations.

Landau added a calculation of antiferromagnetism in 1933. At the same time, in 1932, he worked on astrophysics and independently derived the Chandrasekhar limit on stellar masses. To make the story even more impressive, he also developed a theory of adiabatic energy transfer in nuclear and atomic collisions in the same year.

Landau has developed a theory (or "the theory") of second-order phase transitions. Recall that this terminology due to Ehrenfest indicates that the first derivatives of the free energy with respect to thermodynamical variables are continuous (for example the derivative, called the density, with respect to the chemical potential, unlike in first-order phase transitions such as melting of ice caps where the density jumps) but the second derivatives have a discontinuity (things like the heat capacity change in the transition and really have a singularity over there).

The key observation is that these phase transitions involve a symmetry breaking. Typically, the high-temperature phase preserves a symmetry but the low-temperature side breaks it. Qualitatively, the free energy depends on an "order parameter x" as I have suppressed the dependence of A on other variables. But what is important is that even if the coefficient K(T) depends smoothly on temperature T around T equal to the critical temperature, the physics will not as long as K(T) changes the sign.

If K(T) is positive, you see that the minimum of A(x,T) is at x=0. The system will sit at x=0: this corresponds to an unbroken symmetry. On the other hand, once K(T) becomes negative, typically for T cooler than the critical temperature, A=0 at x=0 becomes a maximum rather than a minimum. Instead, the system will choose the minimum with a negative A(x,T) at a nonzero value of the order parameter x: this corresponds to a broken symmetry. 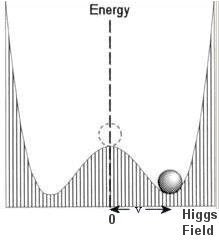 Particle physicists know the potential very well from the Higgs mechanism. The politically correct, anti-Slavic terminology for this potential is the "Mexican hat potential". However, the historically correct name of the potential, taught across the post-socialist Eurasia, is the Landau buttocks.

You can check that the shape looks appropriately and that Landau's insights pretty much include everything that was later used to break the electroweak symmetry: Landau's buttocks are the most important ingredient in Weinberg's toilet, as Sheldon Glashow calls the so far unobserved sector of the Standard Model. Landau was extremely good in figuring out some qualitative features of the behavior of various systems - or "emergent phenomena", if you wish - which are usually relevant at many places of science.

A related insight that rapidly followed his theory of phase transitions was their 1950 theory of superconductivity in which the electromagnetic U(1) symmetry is spontaneously broken (higgsed) by a vacuum expectation value of a charged field (corresponding to a collective wave functions of the Cooper pairs, as understood later by BCS).

Potentials for such a charged field occur at many places of physics. For example, many non-geometric and string-size compactifications of extra dimensions in string theory are described in terms of Landau-Ginzburg models and their generalizations. I am talking about theories that flow to the minimal model CFTs and that can be combined into the Gepner models, among other theories.

All these insights lie at the core of theoretical physics where theoretical condensed matter physics and high-energy physics are both excited by their relevance. Even closer to the standard particle physics is the Landau pole; I wrote most of the Wikipedia article, much like the core of hundreds of similar examples.

Already around 1954-1955, Landau realized that the inverse squared electromagnetic coupling was, at least at the one-loop level, a linear function of the logarithm of the energy scale. It was therefore a running coupling and Landau could determine the slope. For QED, the quantum effects make the interaction stronger at higher energies. At some exponentially high energy scales, much greater than the Planck scale, the inverse coupling drops to zero and the ordinary coupling thus diverges.

Even though the higher-loop effects could lead to unexpected conclusions, the U(1) gauge theory almost certainly breaks down at this point and an embedding of the gauge theory into a more UV complete theory (such as a grand unified theory) is desirable. The point is referred to as the Landau pole even though some physicists, especially condensed matter physicists, often like the term "Landau ghosts". Note that in certain conventions, the inverse squared electromagnetic coupling is the coefficient of the photonic kinetic term i.e. the squared electromagnetic field in the Lagrangian. As the coupling formally gets negative, the photon propagator becomes a (wrong-sign) ghost field.

In 1936, Landau worked out a transport theory in plasmas. He returned to similar topics a decade later. Landau damping is the exponential decrease in time of the amplitude of longitudinal space charge waves, found in 1946. It prevents an instability from developing. A proper technical derivation of the effect depends on contour integration but Wikipedia offers you a vague argument involving surfer dudes.

In 1953, Landau generalized Fermi's model and constructed a relativistic hydrodynamic model for particle production in high-energy collisions. In 1956-1958, he presented his theory of Fermi liquids.

In 1957, Landau proposed a two-component theory of neutrinos and CP conservation in weak interactions, independently of Lee, Yang, Salam, Marshak, and Sudarshan. Two laters later, he worked out the analytical structure of singularities in scattering amplitudes. We have mentioned a lot of stuff, so the following quote by Landau finally starts to make a lot of sense: