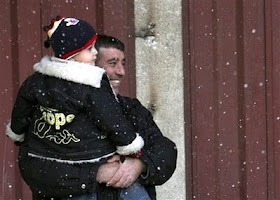 For the first time in more than 60 years, snow visited the Iraqi capital on Friday (see current weather there). Two fronts peacefully met in Baghdad and people rejoiced while the U.S. troops celebrated it with impolite words. 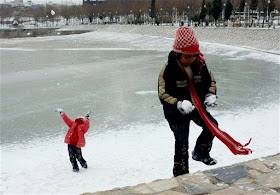 Young girls in the park...

If you're an Iraqi citizen searching the Internet whether it is a sign from God, the answer is Yes. Snow is an omen of peace. Snow should become the Iraqi minister of information.

You should finally show the world that you are better than the U.S. liberals and thank George W. Bush and the U.S. troops for the freedom they brought you and the potential they unleashed: Allah has already thanked them. 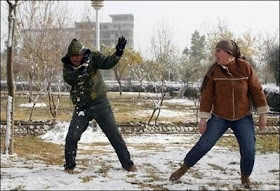 Bonus: Northern Saudi Arabia shared the cold experience with Baghdad, with snow cover, speedy winds, and livestock freezing. It looks as their coldest winter in 20 years. Children as well as teenagers were building snowmen and some of the bravest ones even snowwomen.

Afghanistan buried a hundred of people who have frozen. Israel Electric may plan some rolling blackouts during the record demand caused by the deadly freezing winter.
Luboš Motl v 9:16 AM
Share