Czech prime minister Mirek Topolánek is visiting the U.S. and he has signed something that should have been signed a long time ago. 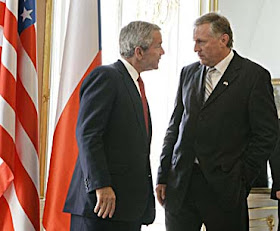 Bush and Topolánek, a somewhat older and funny picture.

The old EU members have been allowed to travel to the U.S. without the classical travel visa - an obnoxious, time-consuming, and rather expensive piece of paperwork - for quite some time. The Czech Republic and others could not even though the Americans have been, of course, welcome to Czechia without any visa for decades. Countries such as the Czech Republic usually had too high a rejection rate, well above the 3% threshold, which was the technical reason why they couldn't enter the no-visa club.

According to a new U.S.-Czech agreement about the mutual understanding, the condition could be waived and the classical travel visa could be abolished as early as in September 2008. So you should wonder what did the U.S. get for such generosity. They got the access to some biometric and biographic data and the right to have security units on aircraft. And surely enough, a more friendly attitude to the U.S. radar is expected, too.

If it works out, it would be great. I think that this is the old-fashioned kind of politics or diplomacy that I always prefer. Two countries trade certain services or friendly gestures that are good for both sides, if you add all the pluses and minuses. In such an approach, there is not too much mystery about the drivers of some new policy changes and there are no hidden and potentially controversial expectations that one side should be infinitely grateful to the other side or something like that. Good bills make good friends, or whatever is the English version of this proverb.

It has been shown by an independent audit that the Czech Republic has only used its competencies to negotiate this agreement as opposed to the policies that have been moved to Brussels. Nevertheless, the European Union has been trying to create problems for this individual Czech initiative for quite some time - and it may even continue to do so.

This story is another example how counter-productive and illogical the attempts to transfer these traditionally national decisions to the EU bureaucratic headquarters are. The old EU members have been allowed to visit the U.S. without visa for many years and if the EU were really promoting some kind of unity of its member countries, it would have negotiated the same Western rules for the other EU members, too. Or it would at least have made some progress towards this goal.

Well, the EU failed to do so which is why the Czech politicians began their own separate negotiation - a strategy that others can clearly try to reproduce: it is a model for visa reform. In this context, the European Union tries to undermine the attempts of its member country to make the rights of the EU citizens somewhat more uniform, while the EU cites the dreams about a unified foreign EU policy as a justification. Isn't it kind of paradoxical?

Whatever is their logic, I hope and guess that it will be getting increasingly obvious that even if the EU wanted some members to be treated as second-class members, the Czech Republic is simply no longer in this club.