I would like to know your opinions about the ideal U.S. presidential candidates, insights into the candidates' strategies, and predictions what will happen. Now when Romney is out and Obama & McCain look strong, the situation simplifies a bit.

When I was looking at the new 2007 state tax returns in Taxachussets with an extra page designed to steal money (the personal exemption) from the people who couldn't really afford (now mandatory) health insurance even though bureaucrats would dictate them that they could, I lost 30% of my confidence in Romney - who has started this mess - anyway. Making things overregulated and overly complicated by superficially left-wing populist policies that actually hurt the poor people and that take money from you according to random ad hoc rules is something I simply can't stand.

I used to like Fred Thompson because of his realist attitudes to the climate alarm and Ron Paul because of his pragmatic, libertarian approaches to the economy and budgets. On the other hand, I don't hide that Hillary Clinton would be acceptable for me - I probably support her much more than you think and I find the anti-Clinton hysteria of many GOP partisans irrational and detached from real issues - and Barack Obama wouldn't necessarily be a disaster either, except that this guy hasn't really achieved anything substantial in politics so far and it is likely that other people would be the de facto leaders.


I hope that you will allow me to stay polite and avoid comments about John Edwards. :-)

Huckabee's opinions about Darwin's theory don't look particularly sophisticated but it is more than compensated by his personal sentiments, music skills ;-), and traditional approaches to many values and under some circumstances, he might actually become the next Reagan. John McCain is a dignified person and the closest candidate to a "hero" but he is simply much more liberal than what he should be and his unusually active promotion of the climate alarm and high age talk against him, too. And among the candidates, I still view Rudy Giuliani to be the best symbol and guarantee of the optimistic protection of the Western civilization against the modern threats.

On Friday and Saturday, the Czech Parliament failed to elect the new president. The second vote will be next Friday.

I have watched the whole show and it was very complicated. There were two candidates: of course, Václav Klaus (66) who is defending the Castle and Jan Švejnar (55), an economics professor in Michigan, who is challenging him. Both of them are non-left-wing economics professors from Prague-Vinohrady. Klaus is an achieved politician who has done a lot for his country while Švejnar is a political newbie whose role to be just "someone" who is not Klaus. However, Švejnar has been known as an economics advisor to Havel and the founder of some economics institutes in Czechia (CERGE...).

Because three deputies got some sort of heart attack after those lengthy, boring, yet passionate negotiations, Klaus was one vote away from being elected. He had 139 votes in the third round and he needed 140. Švejnar with 113 votes had almost no chance.

The Friday session started with decent speeches by Klaus (describing a lot about the roles of the president, using the past five years as a template) and Švejnar (describing vacuous and politically correct visions about a hypothetical future) and both positive and negative testimonies by the deputies in which Klaus was the main topic. ;-)

For example, Topolánek, the prime minister, made a speech in which he presented the Czech president as the main source of light and political inspiration for himself. On the other hand, the Green Party's Bursík offered a disgusting, hateful talk that has deeply offended the whole Civic Democratic Party and its neighborhood, including your humble correspondent. But let me also say that the speech by Martin Mejstřík, a former student leader of the Velvet Revolution, was equally disgraceful and painful.

The presidential election used to performed by a secret ballot by the Parliament throughout the Czech and Czechoslovak democratic history - except for 1918 when Masaryk, the liberator, was elected as the first president simply by a "stand up" and except for the 1989 elections when the communist deputies were forced to unanimously and publicly elect Václav Havel whom they were arresting just a few months before the Velvet Revolution started. ;-)

Secret or public: that is the question

The secret ballot is traditionally viewed as a more democratic solution because the "big brother" in the party isn't controlling (and thus influencing) your vote, something that has allowed the communists to have up to 101% of the population to "be" behind them. But the constitution allows both secret ballot and public vote, there is nothing wrong about either of them, and there was a lot of momentum behind a public vote this year, led by the social democrats who claimed that there could be morally problematic trades going on behind the scenes.

The Civic Democratic Party supporting Klaus (plus many independent traditionalist senators) preferred the secret ballot and by the way, it is pretty clear that the secret ballot helps Klaus because many social democrats (and others, including communists) would vote for Klaus in the secret but they are afraid to publicly irritate the big brothers (and the small sheep) in their party. So there was another reason behind the strategies: the Civic Democratic Party wanted a secret ballot but the social democrats preferred the new, untested public vote simply because they could do the math.

It is widely believed that Klaus would have no problems whatsoever in the secret ballot elections. 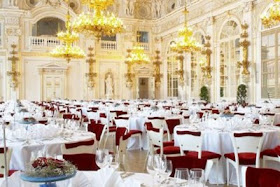 There was a very complicated subtlety about the decision which procedure is adopted: the vote in the Spanish Hall of the Prague Castle (where I was a month ago to see Jazz on the Castle #39) included both the Senate and the Lower House. The Senate preferred a secret ballot while the Lower House slightly preferred a public vote. It turned out later that most of the people in the room wanted secret ballot. The question was how the diverse opinions of the two chambers should be put together.

However, the speaker, Mr Vlček of the social democratic party, made a trick in the morning to guarantee that it would be a public vote. He decided that the representatives should vote about his proposal to elect the president by a secret ballot. It is very important that he didn't propose to make a public vote. Why? Because he knew that one of the chambers, namely the Lower House, would disapprove the secret ballot which would automatically mean that they would make a public vote. ;-)

If he made a mistake and proposed a public vote, it would also fail because one of the two bodies is enough to veto it which is why they would end up with secret ballot. ;-) So everything depended on him.

This trick was immediately attacked by Marek Benda and others. They cited various paragraphs and various speakers disagreed which of them was valid etc. Of course, most of the arguments had some rational core but there was no objective way (and no precedence) to decide which of the arguments is more important. These disagreements about the procedure haven't yet been tested in the Czech democratic political culture. Neither has been the public vote.

So most of the 11-hour-long Friday session was dominated by these arguments and constant interruptions: nothing about ideas or the candidates. All proposals that would give a chance to the traditional secret ballot were rejected by the Lower House. At the end, they returned to Mr Vlček's trick that led to the public vote. The trick is clearly nasty but the folks were so exhausted that there were no additional protests.

About 2/3 of the voters at idnes.cz think that the social democratic party is the main culprit that has made the vote on Friday and Saturday less than decent.

In the first two rounds, the candidates need majorities both in the Lower House and the Senate to be elected. In the first round, Klaus clearly won the Senate but Švejnar won the Lower House by a few votes. With 139 votes, Klaus was ahead in the total counting; Švejnar had 138 votes, largely because the communists voted for him just to stop Klaus from being elected. In the second round, Klaus had about 142 votes in total while Švejnar had 135 or so. If the same vote repeated once again in the third round, Klaus would be re-elected because 141 votes is enough.

However, three deputies - mostly believed to be Klaus' supporters - were hospitalized. The counting was such that 139 votes in the third round wasn't enough. There were 278 deputies in the room and the new president would therefore need at least 139.000001 votes (a majority of the room) to get elected. However, one microdeputy was missing. ;-/ The supported for Švejnar plummeted in the third round as the communists followed their strategy, left him, and succeeded in their publicly stated strategy to block any non-communist president. ;-)

There are debates who has caused the health problems to the deputies. First of all, it is a difficult job even without special events. However, I tend to believe that most of the ill deputies if not all of them were destroyed by pressure from the hostile social democratic camp. There are indications that I am right but no full proof. Of course, the social democrats prefer to promote the opposite hypothesis which looks really contrived. But there has been some clear pressure from the social democratic "hard core". For example, a moderate social democratic senator called Mrs Jana Juřenčáková received a text message saying "Do you already sleep, bitch? How much has Klaus paid to you? Our club has known that we couldn't trust you. Die!"

Moreover, it is conceivable that after the annoying, confusing, and lengthy theater on Friday and Saturday (I forgot to say that there was a lot of controversy about counting the votes, something that makes the public vote look even more problematic), the politicians could agree on the secret ballot, after all. Klaus' chances would thus increase. He is certainly a very patient politician who certainly doesn't get "sucked" into some of the microscopic battles described above. In 2003, he needed 9 rounds to win. A potential new candidate that might be proposed by Tuesday would further decrease the chances of the non-Klaus candidates.

Next Friday, please, think about the Prague Castle because the political life of the last climate skeptic among the countries' leaders might be at stake.