Problems with the independence of Kosovo

Kosovo has unilaterally declared independence from Serbia. Some people outside Kosovo celebrate the decision. I think that this reaction is irresponsible.

A millenium ago, Kosovo was a part of the Serbian state. Slavs used to live there. Of course, the Slavs had moved to their favorite regions just a few centuries earlier and there has been a lot of traffic in Europe 1000-1500 years ago. But there exist both historical as well as modern reasons to consider the territory to be a part of the Serbian domain of influence. Some people call it the cultural heartland of Serbia. The Patriarchate of Peć in Kosovo where Serbian Orthodox Patriarchs are officially inthroned. Should this 13th century heritage site belong to the Albanians, too? How did it exactly happen? And is it OK to point out that Kosovo authorities have unfortunately begun to falsify the history?

Later, there has also been a lot of influence from the Turks, Islam, and Albanians who currently represent over 90% of the population (2+ million) of Kosovo. Places with this kind of complicated history are always sources of tension and - in some cases - wars. I believe that the best working strategy in similar cases is to try to preserve the status quo as much as possible and to convince both (or all) sides that such a new beginning is acceptable. Compensations shouldn't be about a complete control over a territory.


The question of the Kosovo independence splits Europe in a very serious way. Most importantly, Serbia vigorously opposes it. However, Bulgaria, Cyprus, Greece, Romania, Russia, Slovakia, and Spain disagree with it, too. That's a rather impressive collection of countries in the region, including a major nuclear power, that no responsible politician should try to ignore. Add Bosnia and Herzegovina, China, Georgia, Indonesia, Sri Lanka, South Africa, Vietnam, and many others that are not too happy about the independence; Bulgaria, Egypt, Malta, the Netherlands, Portugal, Sweden, and others want to be cautious or leave the decisions to the U.N. If someone thinks that it will be straightforward for the world to accept this new country, his mistake could have grave consequences. This question splits the world and the region into two comparably strong groups.

Why does the EU so self-confidently ignore the opinion of its 6 (out of 27) members? Why do the U.S. follow?

I don't believe that one can honestly say that Serbia is bad and Albania is good. At the same moment, I feel that some people approach these disputes in similar naive and dangerous ways. I feel that it is the simple reason why both the EU and the U.S. plan to recognize the new country. Why do they dislike Serbia so much?

Well, because Serbia has recently had some aggressive communist leaders; if this is your thinking, get rid of these silly stereotypes: Serbia currently has a pro-West president. A related anti-Serbian sentiment arises because the U.S. and other countries recently fought against this nation. The problems in Yugoslavia have been temporarily solved for the price of treating the Albanians (and a few others) as the good guys and the Serbians as the bad guys. That's the main reason why the Albanians love America so much today. Does it mean that this is how the two nations should be viewed forever, even in cases when it begins to looks obviously unfair?

There is one more general reason why some people support the independence of Kosovo: because these folks systematically enjoy to support an underdog and Albanians in Greater Serbia may count as an example.

It is damn dangerous to support underdogs who create serious enough problems for more powerful - and at least partly justifiable - groups and nations in the region.

The independence of Kosovo is likely to lead to a new wave of escalating tension in the region. This development certainly can't be compared to the Velvet Divorce - the peaceful dissolution of Czechoslovakia. While it is true that most Czechs used to be afraid of this split, pretty much everyone agreed that it was a legitimate choice (and the right of the Slovak nation) when the politicians were actually negotiating about it. At the end of 1992, both sides agreed with the plan and they had a framework that treated both nations as equal. There existed no significant territorial dispute. The political representations did their best to proceed in a perfectionist and smooth fashion. That's why it worked and why the divorce has actually improved the Czecho-Slovak relations at the end.

The dissolution of the Soviet Union was less peaceful but it was still understood by a significant part of Russian people that most of those nations simply had the right to be independent (again). The territories have never quite belonged to Russia. In the case of the Baltic and a few other countries, this statement is obvious. In the case of e.g. Ukraine or Belarus, it is less obvious but the consequences of the independence are less significant because of the proximity of those Eastern Slavic nations that is guaranteed to last.

The Serbia-Montenegro split in 2006 can be viewed as another example of a Velvet Divorce. At the end, everyone agreed with it. Moreover, both regions are controlled by Southern Slavic nations. 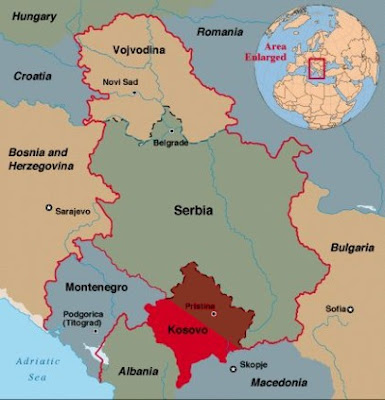 A hypothetical new Kosovo state can't be "neutral" in any way. Because this region uses the euro as their currency, it can be a seed of a war inside the de facto eurozone - something that we normally think of as a region of peace and stability.

I feel that it would be more acceptable a solution to divide the territory in an arbitrary way (see the map above for an example) into the Serbian territory and the Albanian territory and merge these parts with Serbia and Albania, respectively, giving them (temporarily?) the status of autonomous regions within Serbia and Albania, and attempting to create a plan to peacefully transfer most of the Albanians from the Serbian portion within a few years and to convince both sides that it is a fair compromise.

It is hard to believe that Serbia will accept to lose the territory completely. It's just too big a change. And I think it is absolutely silly to imagine that an independent Kosovo doesn't mean that Greater Albania increases in size. The declaration doesn't really mean anything else. A future unification of Albania and the independent Kosovo (plus a portion of Macedonia that may separate later) would only be a matter of time and formalities. This dispute is about a battle of Serbian and Albanian blood to control this territory and it would be foolish to pretend otherwise.

Miloševič's ethnic cleansing in Bosnia more than a decade ago (8,000 dead in the Srebrenica massacre, and they were Slavs) was horrible but it also shows how strongly the Serbians think that Bosnia was a part of their broader realm. The situation with Kosovo is analogous. And sorry to say, they have a point. Human lives are precious but I feel that the unhappy and undeserved fate of 8,000 lives just can't change the character of similar territories. In the past, millions of lives have been paid for comparable territories in wars.

Finally. An independent Kosovo would become a dangerous example for a large number of similar regions in Europe with similar separatist tendencies. For example, Spain opposes Kosovo's independence because of fears from a future Basque state. If Russia had to resign over Kosovo, it would probably start to support the independence (=a step towards incorporation) of "its" regions in Georgia (South Ossetia and Abkhazia) and Moldova (Trans-Dniester area).

It is kind of paradoxical that certain people who love ever closer European unification also love the separation of the European countries into ever smaller pieces. Yugoslavia has also been a smaller, local counterpart of the European Union. In fact, it was a reasonably working federal state and Josip Tito wasn't even Serbian: he was 50% Slovenian, 50% Croatian (that's probably why he was creating autonomous regions in Serbia but not in other subcountries of Yugoslavia).

Unless additional reasons are carefully explained, it is inconsistent to support a tight unification in one case and a complete separation in the other case. I think that some people want to social-engineer difficult things in Europe and they build on naive, black-and-white descriptions of various complex controversies while they misunderstand the values and sentiments that really matter in these conflicts.