... but it's very tough. ;-) Although a famous scientist from New Jersey informed me about a new and cool article in the

in advance, I completely exploded in laughter when I actually saw it. It is explosive. The picture below says it all: 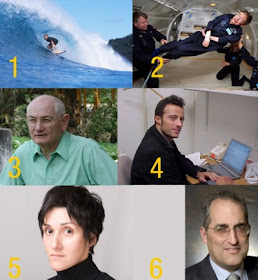 This is just hilarious! In this list of New Einsteins, Stephen Hawking (2) and Edward Witten (6) have a very hard time to compete with the true geniuses, namely a surfer dude (1), a critic of Newton's law of gravity (3), a double Einstein with somewhat perturbed dispersion relations (4), and the ex-girlfriend (erratum: former spouse) of the author of the hitparade (5) who has also helped him to model particles as octopi swimming in a foam. The author of the hitparade, Lee Smolin, is "too modest to admit" that he is the Einstein number (7). Indeed, they are the ultimate "iconoclasts" as the magazine explains. ;-)


In this era of a new kind of physics, four orders of magnitude of a difference between the actual scientific contributions of the candidates such as Edward Witten, Stephen Hawking, or Garrett Lisi no longer matter. What matters is your X-Factor - namely snowboards and the proximity to cranks popular with the media.

Discover magazine is actually the very same magazine that made me interested in string theory exactly 20 years ago, with a rather detailed description of the history of the field and the anomaly cancellation in type I string theory. Well, times are changing.

I have repeatedly predicted that the media couldn't get more ludicrous with presenting all these retarded "iconoclasts" as serious scientists but I have been repeatedly proven wrong. So I decided that I will never make the same prediction again. ;-)

This is the work not only of hostile imbeciles such as Peter Woit but also of wise but phlegmatic cowards in high-energy physics who always prefer to stay silent instead of patiently yet unambiguously explain e.g. why Lee Smolin is a textbook example of a limited, ignorant, cheesy crackpot. You are all co-responsible for this thing and if you're gonna continue with your policies, I assure you that it will be getting even worse.