Today, the Czech Parliament performed its second presidential election and it was a success.

In the first round, Klaus received 141 votes. In the second round, he repeated it. In the third round, whoops, he did it again: a sign of his consistency, stability, and reliability. ;-) It was more votes than what was needed (140, more than 1/2 of 279 in the room). So Václav Klaus was re-elected the Czech president for five more years which is very good. 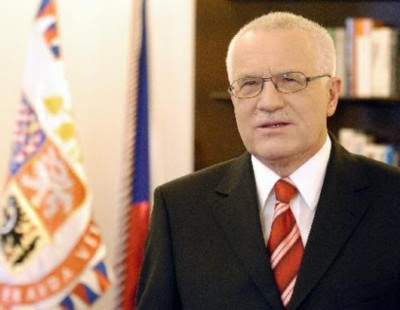 There were interesting talks and a much calmer atmosphere than during the first election last week. Mrs Jana Bobošíková gave an intriguing, although exceedingly socially oriented talk, too. It was enough for her and she gave up her candidacy before the voting began.

Klaus's speech (AFP) was especially good. He didn't avoid some controversial topics - post-democracy, political intimidation, euthanasia, legal drugs combined with illegal smoking etc. He said that if these things are supposed to be the rules of tomorrow, than he is a proud man of yesterday. ;-) He offered some quotes from Abraham Lincoln's re-election (Lincoln has also said that everyone had learned his positions on everything so new explanations were not needed) and calls for unity by Alois Rašín, the first Czechoslovak finance minister.


Jan Švejnar, an economist from University of Michigan, gave a somewhat vacuous speech about his peacefulness (a feature that no one doubts) and he had no genuine chance as his votes dropped from 136 in the first round to 126 in the second round and 111 in the final round: a sign of instability. ;-) Everything was about Václav Klaus' re-election. Incidentally, Klaus himself supported the public vote which was rumored to be less favorable for his re-election, in order to disprove speculations about black market with secret votes.

He was followed by his party, the neo-liberal Civic Democratic Party, that gave up dreams about the secret ballot and indirectly yet generously supported the public vote, too. The battles about the procedures were thus completely avoided. They exhibited a lot of self-confidence, higher than what you would expect from that 1 excessive vote that Klaus received at the end. Three rounds followed abruptly. The last round finally allowed the votes from both houses to be added together which made 141 votes more than enough.

Celebrations started. Everyone was nice today. Klaus promised to be the president of everybody and all relevant politicians including Havel have congratulated him.

The only major interruption were 45 minutes ordered by the Green Party. This party sent a woman (minister Ms Džamila Stehlíková) to Kutná Hora (30 miles from Prague) to pick Ms Olga Zubová, a green politician who underwent surgery on Tuesday and couldn't attend the meeting because of some post-surgery weakness and fever. However, Zubová was not found at home, so the agent returned back to Prague. It seems likely that the Green Party together with the Rainbow Movement, Greenpeace, and similar green stuff will now try to assassinate its member. :-(

Nevertheless, the nervosity dropped even in the Green Party after the main result was announced.

The social democratic party lost one more deputy. He was instantly expelled from his party after he supported Klaus. The socialist bosses have also accused him from accepting bribes. Jiří Quimby Paroubek, the socialist party chairman, makes the hard-line life of his comrades pretty difficult. No wonder that they are leaving the party one by one. When Paroubek leaves the party as the last man, I hope he won't forget to turn the lights off. ;-)

One of Klaus's numerous tasks in the second term will be to abolish the global warming religion in the European Union that will be under the Czech Republic presidency in H1 of 2009.

A poll at sme.sk, a Slovak newspaper. Who should become the Czech president?


Well, Gašparovič isn't a Czech citizen so he couldn't become our president. The second best choice of the Slovak readers was followed instead.