I am going to explain, using Lee Smolin's new paper,

why he is a textbook example of a crank and what it means. The paper argues that all theories in the world are equivalent to each other and encoded in the formula "S=Tr(M^3)". ;-) 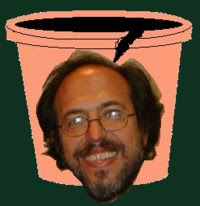 But let me start in 2002. By sending me an e-mail, Lee Smolin invited himself to Harvard, quoting his favorite clichés about the diversity of ideas. All alternative physicists might want to learn his "right" way to be pushy and obtrusive. ;-) I didn't really pay for the visit and because I knew that he had been invited to other places before, such as Rutgers University, I told myself: "Why not?"

Before the lunch in the Society where I invited him as well, he told me about a "great" idea, namely the equivalence of M-theory and three-dimensional Chern-Simons theory. His argument was as follows:

I don't believe that M-theory is complicated. It must be simple. And because the Chern-Simons theory is simple as well, they must be equivalent.

First, I exploded in laughter. However, within a minute, it became obvious that Lee Smolin was either dead serious or he would continue to pretend so for quite some time. I was thinking about the best way to call a physician but he didn't look particularly dangerous so I decided it wasn't my job.

In physics, we have learned about many equivalences or dualities - fascinating and non-obvious relationships that prove that the theories we study are important because they can materialize in many ways. But in each case, there exists a very non-trivial body of evidence (or full proof) supporting such a relationship. Only when such evidence exists, there is a reason to talk about a duality.


The probability that two randomly chosen theories are equivalent is comparable to 10^{-500}. Make no mistake about it: Lee Smolin's identification of two obviously different theories is on par with conspiracy theories that electromagnetism is governed by Elvis Presley who lives in ToraBora.

I doubt it is correct to say that M-theory is "simple" and even Chern-Simons theory is tough when you try to compute things that go beyond the Lagrangian. But even if these two theories were equally difficult, you're extremely far from having evidence supporting the claim that they are equivalent. In fact, when we talk about dualities, the two equivalent descriptions usually don't look equally complex! Quite on the contrary. In a typical point of the moduli space, one description is weakly coupled (and easier) and the other is strongly coupled (and harder). Smolin has made every single error he could have made.

Those six years haven't changed much and now, in 2008, he has the courage - and favorable external circumstances - to submit this complete lunacy right into the hep-th archive.

In the paper, he argues nothing less than that virtually all theories of physics are equivalent to each other. That's a pretty bold statement - more precisely, it is a sign of a complete breakdown of the author's ability to make a judgement. A few pages of irrelevant comments about the anthropic principle and weird speculations about the laws of physics that must evolve in time (a very characteristic feature of Smolin's own character) - statements that are both ludicrous as well as unrelated to the bold claims announced in the abstract - are followed by this "big equivalence" described in many verbal ways, using buzzwords such as "universality class" etc. Technically speaking, all the statements are obviously incorrect.

To make things even more bizarre, he represents all gauge and gravitational theories by a representative that is claimed to be equivalent to all of them. It must have a lot of degrees of freedom, so Smolin chooses an N x N matrix. And it must have a non-quadratic action leading to non-linear equations of motion. Why? Because if the system were linear, even Lee Smolin would be able to see that they can't be equivalent to interacting theories.

Via Chern-Simons, BF, and Plebanski's systems of equations - neither of which has ever been connected to gauge theories or quantum gravity in any, at least partially convincing way, he claims that the simplest non-quadratic action he can choose for his matrix M, namely Tr(M^3), is equivalent to all gauge and gravitational theories in the world.

How big a lunatic you have to be to read a paper about a completely randomly chosen primitive formula claimed to describe all physical theories in the world and to believe that the author - who has already written dozens of articles of the same kind - is a serious physicist?

The only small problem with his hypothesis that even Lee Smolin himself is able to see is that his theory doesn't seem to contain fermions. (Incidentally, his reason to argue that the fermions are not there is also wrong: fermions do sometimes occur as solitons in theories with purely bosonic degrees of freedom. He hasn't made any correct analysis even in this simple question.)

Well, if his IQ were 40 points above his current level so that he could compete with average graduate students and/or if his scientific integrity were 1,000 times higher, and I am not really sure which of these two conditions is more relevant to his case, he might be able to see a slightly more extensive set of challenges faced by his "theory", for example that it doesn't contain any physics of concrete n-dimensional gauge theories or gravity.

It is absolutely trivial to see that his "theory" cannot be equivalent to a single gauge theory or a quantum-gravitational background that has ever appeared in serious scientific literature and the 3+1 additional conjectures written down in the conclusions are wrong, too. In all cases, Lee Smolin only tries to satisfy one consistency check or less. His reasoning is similar to the statement that an elephant is the same thing as a truck because they are equally large, while paying no attention to other possible sources of inequivalence between trucks and elephants.

One can simply look at the spectrum and the physical amplitudes. And they are obviously different. Is Smolin really so unbelievably incompetent that he can't see that a random, purely bosonic matrix model in 0+0 dimensions cannot be equivalent to QCD or any other theory that matters? Has he ever seen how physics papers dealing with similar models (matrix models, in this case) actually look like? Instead of having most of the pages filled with preposterous "hypotheses" based on a hopeless wishful thinking, serious papers actually analyze the models and only claim things that are supported by something, at least by circumstantial evidence, and some of these findings turn out to be very important robust. This is a method that Smolin is absolutely unable or unwilling to follow.

Hyping preposterous hypotheses in the sensationalist tabloid media and victimist claims that crackpots like him must be treated on par with scientists - and maybe they are more because they are the "seers" and "new Einsteins" - is his way to go.

Equivalence and something that is not equivalence

Of course that quantum theories with infinitely many degrees of freedom have isomorphic Hilbert spaces: all infinite-dimensional Hilbert spaces are unitarily equivalent to each other. But that doesn't mean that the theories are equivalent. The theories are determined primarily by their dynamical laws, e.g. technically by their Hamiltonians, and the Hamiltonians are completely different.

Saying that two theories are equivalent means that there exists a map M from the Hilbert space H1 of the first theory to the Hilbert space H2 of the second theory such that it maps the Hamiltonians h1, h2 (or other two operators representing dynamics) of the two theories to one another, i.e.
It is trivial to see that the spectra of two theories - e.g. the Tr(M^3) model and QCD - are not isomorphic in this way so their Hamiltonians cannot be equivalent. If you allow more general - time-dependent or non-local in time - maps between the degrees of freedom of the two theories (or if you ignore the required relationship between the Hamiltonians altogether), you could perhaps find a relationship but such a relationship cannot be described as a physical equivalence because it is completely vacuous.

Theories are determined by their dynamical laws - technically by Hamiltonians, actions, or S-matrices (the latter is "results-oriented") - and if these objects are physically different in two theories (as determined by spectra and other physical quantities independent of the formalism), the theories are simply inequivalent. That's what we mean by the word "inequivalent" and the inequivalence of two generic theories can be shown almost instantly. It is just amazing that someone is ready to create fog about these trivial matters and, even more importantly, that Ginsparg allows this bullshit to be posted on hep-th.

I urge Paul Ginsparg to cancel the endorsements needed for the author of this crackpot paper (and dozens of others) to submit additional preprints to the hep-th archive.
Luboš Motl v 8:01 AM
Share