for "confusing the Czech public and for contributions to the development of muddy thinking". The previous winners include many famous figures such as the top singer Karel Gott, writer Erich von Däniken, and the extraterrestrial abductee Ivo Benda, a complete loon and a Czech counterpart of Jack Sarfatti.

Czech-American professor Stanislav Grof received the decadal prize for holotropic breathwork. Thanks to holography, he is able to push his artificial holotropic drugs to any place in spacetime. Grof was an ancient Egyptian priest in his previous lives, as explained by his new book. ;-) 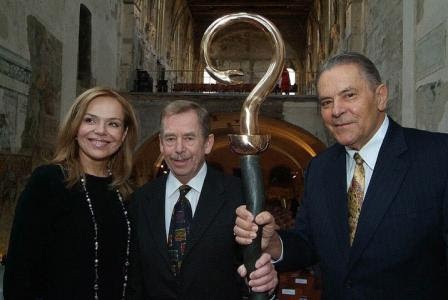 Grof with ex-president Havel and his wife

Two astrologers, Antonín Baudyš Sr, a former minister of defense, and Antonín Baudyš Jr, his son, received the other arch-boulder for predicting the death of G.W. Bush in 2003 (or during his first term). They also predicted a victory for Jiří Quimby Paroubek in the general elections that fortunately hasn't materialized either.

The bronze boulder went to astrologer Milan Gelnar. The silver boulder was awarded to Jaroslav Dušek, a popular actor who argues that people don't need to eat and they didn't need any food after the humans were created. Dušek also predicts the end of time on 12/21/2012.

The golden boulder for individuals was grabbed by Tomáš Pfeiffer who is famous for curing his patients by biotronic energy through the TV screens. Last year, Pfeiffer was unable to save a dying woman but by accident, he telepathically made her worried about his old car and the woman bequeathed her car to him. :-)

In the category of teams, the bronze boulder was picked by the Czech Association of Patients and its vice-president Karel Erben - together with a communist deputy, Ms Jiřina Fialová - for their promotion of the cure for cancer by lowering the level of homocysteine - the only contribution among the winners that could hypothetically have some merit according to your humble correspondent.

Erben was the only winner who personally picked his award. In his five-minute speech, he revealed that the pharmaceutical companies, anxious about their profits, are planning to kill him. ;-)

The silver boulder was won by Ennea, a company that sells enneagrams allowing you to penetrate deep into your own personality.

Beáta Pataky and Július Pataky were the winners among the teams. Jiří Kuchař, their publisher, represented them at the ceremony. He stressed that the victorious husband and wife run marathons barefoot. That's a very important detail because they cure people by pressing their feet and by forcing them to drink their urine. ;-)

The Pataky team is safe against the pharmaceutical companies' plots because of their mental energy barriers.

Sisyfos, me, Czechia, and the world

I have traditionally been close to Sisyfos but I have never been a member. Sometimes the typical members seemed to be lacking charisma and the sense of humor. The club also looked too leftist as far as politics went but I no longer have this feeling.

The choice of the Erratic Boulder winners is very healthy. I am afraid that in the U.S. or other Western countries, similar groups promoting science would use the anti-awards to attack climate skeptics and related inconvenient groups. It is very good that Sisyfos doesn't try to radically redefine the old good boundaries between science and pseudoscience.
Luboš Motl v 11:13 AM
Share