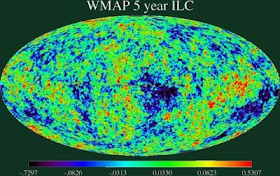 It's been two years since the publication of the WMAP three-year data. As some of the readers know, 3+2=5 so the only sensible thing that the WMAP team can publish right now are the five-year data.

Theoretical physicists and non-experimenters will primarily care about the cosmological interpretation.

Don't expect a revolution here. Some numbers got a little bit more accurate, following Lord Kelvin's prescription for the completion of science. For example,


Tensor-to-scalar ratio is below 20% at 95% confidence level, making theories with gravity waves and with the spectral index above one disfavored.