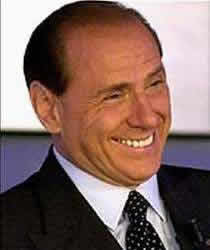 Silvio Berlusconi is back! And the watermelon coalition of the Greens and Communists was defeated so perfectly that they won't even appear in the Parliament, for the first time after the war. During communism, we were taught how strong communist parties France and Italy used to have. In the case of Italy, it is no longer the case.

It is good news for Italy, good news for America, and good news for Italy's partners. I think that he is a very talented politician who is extraordinarily clear and understands what people - those who are not hypocrites, and that includes not only soccer fans, - actually care about. I had to laugh about a lot of statements he recently made such as:

"I am the Jesus Christ of politics."
"Italy shouldn't expect miracles if I win."
"Italian right-wing female politicians are prettier than the left-wing ones. The Left has no taste even when it comes to women."


"I am taller than Putin and Sarkozy. With 171 cm, I am as tall as Prodi. I don't understand why I am always a dwarf on the caricatures while others have the right to have a normal size."
"An excessively high tax rate makes tax evasion ethical."
"I salute the menopause section of this rally [older female supporters] and urge women to cook for my party's candidates."

OK, his doggy style is perhaps too explosive. :-)

Two weeks ago, the Czech government decided it wouldn't recognize Kosovo, at least not before mid-May. The ministers are split while no political party in the country has a pro-independence majority. It seems that the likelihood of the recognition might decrease further because of various events, including the new book, "The Hunt", by Carla Del Ponte.

Carla Del Ponte, a former prosecutor of the crimes from the Yugoslav war, has published a book with a rather convincing evidence that when the war ended in 1999, Kosovo Albanian separatists were not only killing the Serbs but also smuggling their organs and selling them to rich customers in the world. I personally believe these stories. It seems that most Czechs who have heard about it believe it, too. Various people have made a proper investigation of these "inconvenient" things impossible back in 1999. In fact, it is impossible even today.

As far as my knowledge about the culture of these "liberty warriors" goes, the Third-Reich-style crimes do not look too unlikely to me. And if they have the room that was full of blood - except for a 60 cm x 180 cm rectangular bed - and whose bloodiness has been explained by several absurd stories, besides the natural ones, plus the trucks with 300 of humans that went to Albania where the surgery could have been made, I find the accusations to be more likely than not.

But even if these things are not true, there are way too many true things about the Kosovar Albanian politicians - big shots in smuggling, prostitution, and organized crime in general - that mean that decent politicians simply shouldn't support this kind of culture.
Luboš Motl v 11:57 AM
Share