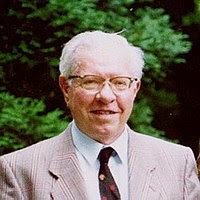 Sixty years ago, on April 1st, 1948, the term "Big Bang" was first coined by Fred Hoyle (picture). The original purpose of this silly phrase - indicating that someone's brain has imploded - was to humiliate the theory most eagerly supported by George Gamow and his students. Today, most of us are so proud about the "Big Bang" that we don't even realize that it used to be an insult.

Hoyle has publicly declared two reasons to dislike the theory. One of them was that according to the measurements at that time, the Universe should have only been 2 billion years old (or young). The other technical reason was that Alpher, Bethe, Gamow (1948) couldn't explain how heavy elements such as carbon (those beyond H, He) were created. This puzzle was paradoxically solved in 1957 by no one else than Fred Hoyle (together with Fowler and two Burbidge spouses; they studied the processes in the stars and the neutron capturing by supernovae) - a major reason why Hoyle deserves to be mentioned in blog articles in 2008.


Walter Baade solved the other problem we mentioned: during Japanese air strikes when lights had to be turned off, he used a longer exposition time to re-calibrate Hubble's distances of various galaxies and the new age turned out to be 10-20 billion years. Fine.

Incidentally, I would guess that the true reason why Hoyle didn't want to accept the Big Bang theory had nothing to do with the technicalities mentioned above. Instead, anti-religious preconceptions could have been the main reason. Hoyle wrote:

"It is against the spirit of scientific enquiry to regard observable effects from 'causes unknown to science'."

He simply didn't like the similarity between the Big Bang and the stories of creation in various religions: another case when irrational dogmas about what science is allowed to be prevented a pundit - and in Hoyle's case, a visionary - from understanding physics of his time (for a while).

The Big Bang could have been naturally predicted by Albert Einstein's general relativity in 1916 - and Friedmann and Lemaitre were damn close to making this prediction of GR explicit in the 1920s - but cosmologists actually had to wait for Edwin Hubble's 1929 observations of the expansion of the Universe on Mt Wilson.

Later, the cosmic microwave background (predicted by Gamow and two junior colleagues, Ralph Alpher and Robert Herman) was discovered by Penzias and Wilson, allowing us to confirm the Big Bang theory for the Universe that was less than 400,000 years old. The abundance of light elements agreed with nucleosynthesis (introduced by Gamow), allowing us to believe the expansion according to the Big Bang theory up to the three minutes after the beginning.

Cosmic inflation, pioneered by Alan Guth, Andrei Linde, and others in the early 1980s, became the only new major era of the life of the Cosmos that led to new profound explanations of the past and predictions for observations that study the past. On the other hand, the observation of the dark matter and especially the observation of dark energy in 1998 was the main modern event that has transformed our understanding of the future of the Universe: the expansion will be accelerating forever - at least if you throw away times longer than the lifetime with respect to quantum tunneling or the (even longer) Poincaré recurrence time. ;-)

(Most Western European languages clearly prefer import over creativity and the following one is no exception.)

(Czechs and Slovaks would also understand "Velký výbuch", a "Great Explosion", but we simply chose a more special word that is closer to "Bang".)

(The creator of this language is a big time "alternative cosmologist" himself haha.)

(Note the same prefix "pra-", also identical to "Oer-" in Dutch and "Ur-" in German, meaning "ancient" - something that you know if you ever drink "Pilsner Urquell" or "Plzeňský prazdroj" - and displaying a Slavic influence on esperanto. "Pok" is a kind of "eksplodo", an explosion that reminds me of popcorn explosions, "puk".)

The Slavic languages seem to be the most colorful and creative group.

A partial hat tip and thanks: Jiří Grygar

Incidentally, Dr Grygar is currently getting - through text messages and other channels - threats of physical liquidation from crackpots who are grumpy about their idiotic paranormal program, "The Detector", that was aired on TV before Grygar and others helped to stop it. For example, see the part about the Tunguska event that was caused either by a collapsing extraterrestrial UFO or by Nikola Tesla who tried to focus and transmit energy at a distance. ;-)

I know very well that crackpots can be extremely aggressive and I wish Dr Grygar that the crackpots will shut up or, unfortunately more likely, die before they damage his good mood.
Luboš Motl v 11:32 AM
Share