One of the obvious but not necessarily conceptually far-reaching tasks in perturbative string theory is to explicitly calculate higher-loop scattering amplitudes in the perturbative expansion.

The tree-level amplitudes and one-loop amplitudes are pretty much covered by the basic textbooks of string theory. D'Hoker and Phong have written explicit formulae for the two-loop amplitudes in the NSR formalism. Is it possible to get higher? Of course, it is. We will talk about it below. 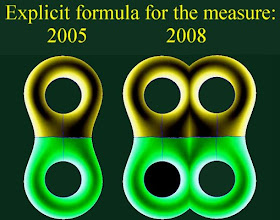 Now let me offer you another very transparent example of the extremely poor quality - and non-existent lasting value - of the writings at a notorious blog vitriolically attacking theoretical physics, called "Not Even Wrong". Its infamous owner wrote back in 2005:

... D’Hoker and Phong have been studying superstring amplitudes for nearly twenty years

... I don’t think D’Hoker and Phong will be coming out with complete results for genus 3 anytime soon, so the state of the art is that there is now a finite and well-defined version of the two-loop superstring amplitudes, with the problem of higher loops still open. While claims abound about the finiteness of higher-loop amplitudes, before believing them one should first take a look at the tricky problems that D'Hoker and Phong had to overcome to get well-defined two-loop amplitudes.

Let me clarify again what the purpose of the comments above was. Peter Woit wanted to lead his readers to the belief that it would take decades if not centuries to move from genus two amplitudes to genus three amplitudes and the very question of finiteness of even perturbative string theory would probably be undecided for centuries - a talking point addressed to the extremely undemanding internet users who were reading his blog.


Lee Smolin has written the same misleading garbage combined with outright lies in his anti-scientific book, The Trouble with Physics.

... At the same time, the obstacles to proving [finiteness] seem substantial.

... They have since then been working on the [three-loop] term. They understand a great deal about this term but have no proof so far that it is finite. Whether or not they succeed in proving all the infinite terms finite remains to be seen.

... The problem is that the law is simple only when applied to the original theory in twenty-six dimensions. When supersymmetry is added, it becomes quite a bit more complicated.

... On present evidence, without a proof or a counterexample in hand, it is simply impossible to know whether string theory is finite. The evidence can be read either way. After a lot of hard work (albeit by just a handful of people), there are several partial proofs. This can be read either as clear evidence that the conjecture is true or that something is amiss. If such gifted physicists have tried and failed, and if every attempt remains incomplete, it may be because the conjecture they are trying to prove is false.

... There is no proof of string theory’s finiteness even at a physicist’s level of rigor. Given this, I don’t have a view on whether supersymmetric string theory will turn out to be finite or not. But if something so central to the claims of a theory is thought to be true, work should be expended to turn that intuition into proof.


All these comments are, of course, a complete nonsense. The perturbative finiteness of superstring theory has been proven decades ago regardless of the personal opinions of two incompetent pseudoscientists and these proofs - there are several of them with various relationships, see e.g. Berkovits; Atick, Moore, Sen; Martinec; Mandelstam or see how these things work out in light cone gauge matrix string theory - don't require the form of the measure to be known explicitly. In this sense, you may call them "existential proofs". One doesn't have to know the technology behind D'Hoker & Phong's approach to understand the perturbative finiteness of string theory. While there is no a priori reason why explicit formulae for higher-loop amplitudes should exist, it turns out that they actually do exist.

Lee Smolin's comment that string theory becomes complicated when supersymmetry is added is even more absurd. He probably wrote it because he has never quite mastered supersymmetry - and Grassmann numbers, fermions, and spinors, for that matter: it is easier to draw fishnets and octopi, isn't it? Sorry but other physicists do understand these things. String theory with supersymmetry is much more "simple" in the physically invariant sense and the supersymmetric amplitudes are much more well-behaved and more convergent, and not more dangerous, than the purely bosonic amplitudes.

Now it seems that the more ambitious task that has been explicitly solved as of 2008, only three years after the vitriolic quotations above were written, includes not only three-loop amplitudes - presented nearly as a religion by Woit and Smolin - but also four-loop amplitudes; recall that every time you add a loop, the complexity of the calculation increases "exponentially". Be sure that writing correct papers about these technical matters is more difficult - by many orders of magnitude - than writing vitriolic anti-stringy misinformation capable to confuse uninformed laymen. It is the same difference as the difference between designing & building a skyscraper on one side and directing an aircraft to this skyscraper on the other side. But despite this advantage of Peter Woit, Lee Smolin, and Al-Qaeda, theorists and maybe even architects ;-) are actually ahead of the terrorists and architects of propaganda. Last week, Princeton mathematician

wrote his first paper on high-energy physics and it has solved nothing less than the problem of genus 4 - and perhaps more complex - amplitudes. He rewrote the Ansätze by D'Hoker and Phong in such a way that a higher-loop generalization seemed obvious and checked that the genus 4 generalizations obeys the factorization constraints and the vanishing of the partition sum (vacuum energy). When things are stated explicitly, they sound simple: his measure is simply a product of the bosonic measure and a modular form of weight 8 for Gamma_g(1,2).

It is conceivable - and very likely if certain modular forms admit holomorphic roots - that his paper actually contains the correct answer at any order - the measure for arbitrary multi-loop amplitudes. With the usual factorization constraints, the measure described at the end of the previous paragraph could actually be unique.

proved the validity of some more consistency checks of Grushevsky's expression. The vanishing of the 4-loop vacuum energy is a consequence of a "remarkable formula" that was proved 30 years ago. In mathematics of modular functions, it may be a remarkable formula. But in physics, it is a trivial consequence of spacetime supersymmetry. In the NSR formalism, it looks like a miracle, but if you know the physical meaning of these formulae, it can't really surprise you. Theoretical physics - and string theory in particular - has the remarkable ability to offer very transparent and easy new ways to look at questions that used to look extraordinarily difficult using the old "eyeglasses".

Those readers who remember some lessons from the kindergarten know what comes after the genus 4 amplitudes. ;-) Yes, Salvati-Manni has also verified some non-trivial modular properties of the genus 5 Ansatz by Grushevsky. He also offers a simplified version of the proof by Cacciatori and especially by Dalla Piazza and van Geemen that their generalization of the D'Hoker & Phong's Ansatz was necessary for the measure to be found at all - already at the genus 3 level. The lesson is that whenever you have a problem with an amplitude that you know must exist because of physical reasons, you might be making too stringent an assumption about the form of the result and some European colleagues may often help you with your problems.

If you have been working on something for nearly 20 years, it obviously doesn't mean that there can't exist people who can solve the problem within a few months or less - again, in a stark contradiction with bizarre opinions of Mr Smolin and Mr Woit about science. Incidentally, in the case of Mr Smolin who pretends to be "searching for new Einsteins", the message to young or new people that "you can't solve it soon enough because D'Hoker and Phong haven't found the genus three measure for 20 years" leads to an extraordinarily hypocritical combination. It is dumb and falsified, too.

As far as I can say, the progress in these four-loop papers is purely technical. They simply write new and relevant modular functions and use the correct powers of the normal Jacobi theta functions, among other details. When these things are combined, it works. It has to work. The measures obviously do exist as functions and the only question is whether these functions look familiar to us or not - whether we call these functions "well-known" or "special" or "messy". Competent enough (or ingenious enough?) experts in modular functions will simply recognize them.

This progress in higher-loop amplitudes is impressive mathematically but I still think that from a physics viewpoint, it may be viewed as a conceptually shallow industry dominated by the brute force of powerful brains. In other words, the NSR approach is simply not the most sensible approach to compute the vacuum energy of a supersymmetric theory, among similar problems. ;-)

I am afraid that in contradiction with the opinions of Lee Smolin, the detailed knowledge from the recent four-loop papers won't impress people outside the community of specialists focusing on modular functions. However, there is no doubt that these amplitudes do exist and are finite at every order and I would say that they are known to be finite even outside the asymptotic series of the perturbative approximation.

There is one more profound difference between the reasoning of string theorists on one side and the rants of haters of science on the other side. Simply speaking, the string theorists tend to learn a lesson while the likes of Peter Woit and Lee Smolin don't.

If we have some mathematical objects and a theory depends on some properties of these objects and if we know that "similar" but random objects from the same category would almost certainly fail, then a surprising proof that the conditions are actually obeyed by the particular objects in the theory - namely in string theory - is a very strong and non-trivial piece of evidence that the theory is consistent and on the right track. Some people seem to be completely unaffected by such events which - I believe - means that they don't care about any evidence whatsoever. Virtually all evidence we can have today (or a foreseeable future) is evidence of a theoretical character based on difficult calculations whose outcomes are not obvious "a priori". Pretty much everyone who has ever thought that the quantum gravity questions would be decided by simple experiments has been a loon. At least in this discipline, theory rules. It can't be otherwise and theoretical evidence must be taken seriously by anyone who claims to be a scientist.

But those people are irrational bigots, and so are their readers.