The Czech public television has aired The Great Global Warming Swindle on its ČT2 channel, a "minor" channel attempting to be a counterpart of PBS and targetting intellectual audiences. They called it "Who Is to Blame for Global Warming?" (Kdo může za globální oteplování?). The program wasn't really promoted and I don't think that too many people watched it.

The station has broadcast it again at 12:35 am, on Wednesday 4/16 (after midnight). An interesting feature of the dubbing was their choice of the narrator: it was the same woman with a concerned voice who routinely reads passionate environmentalist texts on TV and it even looks like she must have been reading some of the pro-Soviet texts before 1989. ;-) They probably don't have enough people. ;-)

More generally, the people who spoke in Czech were somewhat less emotional than the people in the original and some of the formulations were slightly more diplomatic (no professionally synchronized dubbing with actors who preserve the style of the original movie - even though Czechs are extremely good in it). It might have made the movie more "serious", in a sense. In the translation, some of the statements were simplified, redundancies were removed. But the essence was kept (I know the documentary by heart, including my own translation of it). In this edition, the movie only had 51 minutes but it doesn't seem that an essential scene has disappeared.


I didn't notice any errors. For example, the incorrectly completed "gap" in a 400-year graph of CO2 and temperature was no longer filled. If you don't know this widely criticized detail, please ignore the previous sentence: it is not too important.

The movie was introduced by a roughly 5-minute monologue by Radim Tolasz, a Czech climatologist and the deputy director of the Czech Hydrometeorological Institute. He represents a typically Czech moderate "both ways" attitude, claiming that TGGWS only says correct facts but "doesn't tell you the other part of the story" (and An Inconvenient Truth doesn't tell you, either). He has basically endorsed the scientific statements from TGGWS but also emphasized that the greenhouse effect is a fact while warning against extremes on both sides.

While I think that he accused Durkin's movie of certain biases that are not really there, I think that Tolasz knows what he is talking about and as far as I could tell, two of us would probably agree about a great portion of the science. One of the things he liked in TGGWS was Calder's comment about the research of squirrels in Sussex that must be justified by links to climate change these days. Tolasz says it is very true and the situation is very wrong because these different things shouldn't be connected.

If you listen to Tolasz, you can see that the hysteria (much like huge portions of the AGW money) hasn't reached the Czech academic circles. And it probably never will. Nevertheless, Tolasz is among those who say "climatologists have already done their job, now the economists should calculate". But he realizes that because of the buzz, superficial arguments tend to be enough and detailed analyses are often not listened to. And he has praised A blue, not green planet by Václav Klaus because it brings some balance to the debate.

Interestingly enough, the TV attempted to be balanced. I am not sure whether the ultimate result was completely balanced because the second program immediately following Durkin's documentary was another one-hour documentary called "A Depopulated Planet?" (Vybydlená planeta?) by Ms Eva Hauserová, a translator (and sometimes writer) of science-fiction and a feminist-climate activist. Her documentary looked at the impact of globalization from a Czech environmentalist perspective. Instead of climatologists and their graphs, her movie featured, besides Jaromír Nohavica's folk songs, mostly various Greenpeace activists and other non-scientists and average social scientists. But don't get me wrong. The documentary still looked kind of professional, not completely silly. But the focus was less scientific, emphasizing questions possibly relevant for average citizens.

The list of "experts" included Mr Miroslav Šuta of Greenpeace who is famous for his "superweed" alarm - he has claimed that genetically modified crops will lead to the rise of huge weeds that will destroy agriculture ;-) (Hauserová is a genetically unmodified gardener herself and fellow activists dressed up as Frankenstein were included!) - and Mr Václav Vašků, the spokesman of the Czech Greenpeace and a co-father of the "Big Chernobyl Lie" - i.e. the claim that the Chernobyl disaster has killed 120,000 people even though the reality was many orders of magnitude lower. In this program, Mr Vašků was speaking about a chemical accident in India. They surely like to talk about these things because they have collected a lot of money that have never made it to India.

The documentary started with Google Earth animations looking at a Czech coal mine that can be seen from space. The white areas really look scary, don't they? ;-) See also this "Climate change begins here, Greenpeace" photograph.

Astronomer Mr Jan Hollan presented a naive explanation of climate change and recommended renewable energy sources but global warming only played a relatively minor role in the documentary. At one moment, Hollan opened the RealClimate.ORG main page on his PC. He said he was not afraid of the future of Czech pensioners because they will be supported by hundreds of millions of people who will move to Europe from the subtropical climate zone. ;-) Children boasted that they leave flowers alone and they don't use deodorants. Various issues such as public transportation and the verification of chemical compounds (all of them may be just like dioxins and freons!) were advocated in the movie.

The punch line of "A Depopulated Planet" was the testimony of a farmwife who makes her own cucumber compotes to fight against globalization and against the international corporate efforts to ruin our small blue planet. :-) Yes, this was the program that was presented as an answer to Durkin's documentary. It was a somewhat amusing type of balance but a typical viewer's impression after having seen these two hours is probably correct: climate realism is mostly a domain of rationally thinking people while climate alarmism is primarily a domain of nuts and uninformed people who have read a rumor somewhere.

Dr Radim Tolasz also introduced the environmentalist documentary but he apparently wasn't familiar with it and only said that this combination of documentaries could inspire a fair debate. 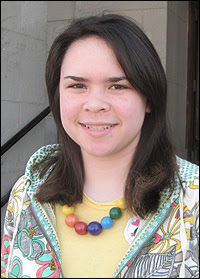 Kristen Byrnes (16), a famous climate skeptic and the author of a website - that we discussed one year ago - that may compete with the IPCC report or at least with its summary, was interviewed by the NPR.

They explain that she is pretty much the smartest kid in her class (and in geometry, she has 99%). And her articulate and cute comments give the story a human touch. A comparably but not equally cute friend of Kristen reveals that she does believe the climate alarm even though she doesn't know why. The NPR correctly say that most people don't know why they believe it, either. Kristen is being attracted to architecture. She might design "green buildings" in the future. I didn't quite understand whether this comment was her idea or the journalists' vision of a "happy end" that Kristen had to endorse. They didn't hide that Kristen doesn't want to be considered an environmentalist because the category reminds her of hippies. ;-)
Luboš Motl v 7:48 AM
Share