While Hewlett-Packard is not among the top chipmakers, it is doing pretty interesting physics in its labs. We have already mentioned the crossbar latch technology a few years ago.

Now, the team of Stan Williams has experimentally realized an old theoretical idea. They have described their breakthrough in Wednesday's issue of Nature, in the article called

It seems like the beginning of the birth of

memory chips based on memristors.

This trick could lead to more efficient memories - denser, more energy efficient, and persistent after you turn off your PC! - and HP claims that the physical issues have been solved and now it is all about engineering. Engineers should draw and produce better circuits.

A theorist who was 37 years ahead of experiments

The existence of microgadgets that should behave like that was theoretically proposed by Leon Chua (UC Berkeley) in a paper from 1971. He decided that resistors, capacitors, and inductors should be supplemented by the fourth passive circuit element, the memristors, that are able to integrate the total current passed through them. It's the fourth mathematically natural possibility.

For memristors, the total charge - the integral of the current - is proportional to (or a fixed function of) the total magnetic flux (more precisely, flux linkeage, also including the factor of the number of turns) - which is essentially the integrated voltage.

If you omitted the integrals above, a memristor would be just like a resistor. For a linear relationship between the charge and the flux linkeage, the coefficient would therefore be nothing else than the ratio of the voltage and the current i.e. the resistance (the "∫dt" factor cancels). But the integrals add a new twist to the whole game, namely the constants of integration i.e. the memory. Moreover, the relation between the charge and the flux linkeage is nonlinear.

Note that even in relatively down-to-earth disciplines such as electronics, it often takes 37 years for a theoretically derived idea to be realized experimentally and probably more than 40 years for it to be commercially viable. This fact is another falsification of the statement by various fashionable pseudointellectuals that the ideas in physics always get mature and experimentally accessible within 5 years.

Finally, let me wrap up by a table that makes it clear why there are four basic elements. For the sake of simplicity, we will be assuming that the relationships are linear. In reality, they are nonlinear. In all four cases, they are relationships between the current I (or its integral over time, namely the charge Q) and the voltage V (or its integral over time, a sort of magnetic flux Φ or flux linkeage). 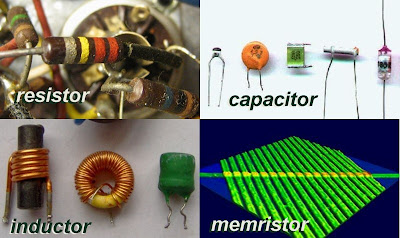 There are two places where you can put the integral sign (or you don't have to): in front of "I" and/or in front of "V". So there are clearly 2 x 2 = 4 combinations how to construct a version of Ohm's law:

Once again, the resistor and the memristor could look like the same thing but it is not quite the case because you can't quite cancel the integral sign - because the constant of integration can be nonzero.