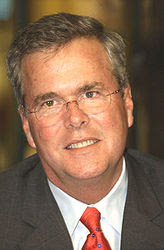 reports that Jeb Bush has finally explained that he is a global warming skeptic. He apparently couldn't do such a thing while he was the governor of Florida because he wanted to enjoy every minute of being a governor. :-)

His successor, Charlie Crist, wants Florida to become a leader in the fight against climate change because otherwise it will sink, as soon as Antarctica and Greenland melt, as dictated by "An Inconvenient Truth." He has already promised that Florida will reduce CO2 emissions by 80 percent before 2050. He will personally lose over 80 percent of his weight by 2050, too, so it shouldn't be a problem for Florida either.

Moreover, Crist is thinking about becoming McCain's running mate. God bless America. ;-) But with these people, you are never quite sure what they will do. Both Crist and McCain want to fight against global warming by rolling back the gas tax for the summer because the Americans feel the heat and with cheaper gas, there will be less heat. By paying a smaller gas tax, Americans can fight against global warming - unless the Canadian beetles (or other friends of the denialist bi*ch Mother Nature who puts Her nose where She has no business - for example into man-made global warming) undo the Americans' heroic acts, as Alexander Ač worries now. ;-)


On the other hand, Jeb Bush argues that the advocates of carbon regulation are driven by religious zeal but the U.S. policies should be based on sound science, not emotions. Finally, Jeb Bush declared a war on alligators who mercilessly kill small dogs who were members of families in Florida. If the alligators and not the dogs were the pets, they could eat the dogs and everyone would be happy. :-)
Luboš Motl v 7:31 PM
Share