This is not the first time a similar experiment was arranged; see, for example, Larry Cahill's article in Scientific American. But because the media have reacted, I mention the experiment, too.

Kim Wallen's group hired 11 male and 23 female rhesus monkeys. All the hairy boys went straight to play with the trucks while all the hairy girls treated the trucks and dolls equally, playing with both of them.

I can't really believe that an educated and mentally healthy person seriously doubts that the correct explanation of these differences in interests and aptitudes is predominantly biological. It seems that some people just find it politically convenient to impose an obvious lie about a social origin of these differences upon others. Too bad that these dishonest bastards have flooded universities and other important places. 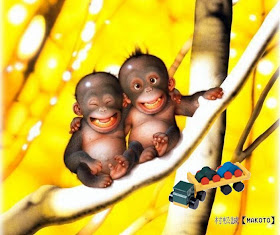 A possible solution that these ideologues could adopt is to team up with creationists - both those in the expensive as well as cheap tuxedos - and argue that the monkey results are irrelevant because humans have nothing to do with the monkeys, stupid! ;-) Alternatively, the director of the zoo where the monkeys lived should be forced to resign for the discrimination against her or, more likely, his female monkey employees! :-)


A kind reader has pointed out a new

in The New York Times, the most e-mailed NYT article of the day. See also the TierneyLab. It is not only about the Monty Hall Paradox. In fact, it turns out - and Yale's economist Keith Chen has pointed out - that a whole portion of psychologists who have studied preferences and learning have made a fatal error in the arrangement and interpretation of their experiments. In fact, they misunderstood the correct answer to the so-called Monty Hall Paradox.

Because they also assumed that monkeys (and perhaps not only monkeys) were neutral with respect to some choices (such as red/green/blue color), they often deduced that the monkeys (and probably not only monkeys) were able to learn once the psychologists observed statistically significant asymmetric choices in the "second round". The correct explanation is pure statistics combined with slight preferences in between the colors and no learning. The hard-wired preferences get amplified by the Monty Hall mechanism tremendously.

Another example how the hard-wired biological preferences can have a strong impact on behavior and how the theories about learning and social influences can be wrong even in cases where everyone - or at least all psychologists (or all social scientists except an economist) - believe them. In this case, much of the discipline dealing with cognitive dissonance may turn out to be wrong - or a pseudoscience.
Luboš Motl v 11:32 AM
Share