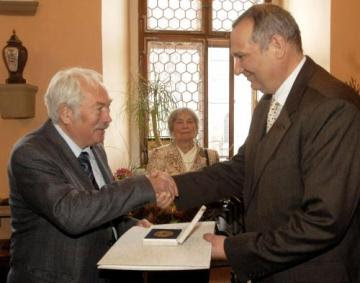 I completely missed this story one month ago! But Peter Grünberg, the 2007 Nobel prize winner in physics and a co-discoverer of the Giant Magnetoresonance, finally received the historical Pilsner signet.

In 1307 when the signet was used for the first time, our American friends were still scalping each other while Pilsen was already getting ready to award those people who would make gigabyte hard disks possible almost 700 years later.

Prof Grünberg is a person who knows how to appreciate awards. He said he would place it in his show glass, next to the Nobel prize. Your humble correspondent has received the Pilsner signet of 1307 as well and it is somewhere in my father's basement. ;-) (Update September 2010: we found it!)

The recipients receive a metalic version of the signet but it can only be "printed" by the mayor into red wax.

Grünberg was born in Pilsen, Protectorate of Bohemia and Moravia, in 1939. As a kid, he could speak Czech perfectly. His Jewish origin didn't play any role because the family was a proper Catholic family. They moved to Dýšina, a nearby village 2 miles from my home. He remembers swimming in the Klabava river and eating cherries. Because the history was tough, the family had to be expelled after the war. But some of his relatives still live in Czechia.


Prof. Grünberg, even though awards suck, your hometown is proud of you.
Luboš Motl v 3:57 PM
Share