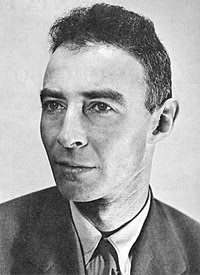 J. Robert Oppenheimer, the father of the atomic bomb, was born on April 22nd, 1904 to the family of Julius S. Oppenheimer, a Jewish German American textile importer, and Ella Friedman, a painter.

His team's precious invention gave the mankind the ability to convince even the suicidal Japanese warriors that further sacrifices didn't make any sense. Later, the divine power of the weapon helped to preserve the global peace for at least 63 years.

And sometime in the future, the result of the Manhattan Project could be necessary to protect the civilization from another suicidal cult similar to the Japanese one, most likely from the cult of environmentalism. These are good enough reasons to celebrate

on Oppenheimer's birthday. It would otherwise be a holiday for liars. Happy birthday, happy Earth Day, Dr Oppenheimer. What a perfect rhyme. :-)

Oppenheimer is not just the bomb


And if you forgot what his valuable contributions to theoretical physics were, let me remind you about the Born-Oppenheimer approximation. These guys have skillfully separated the "fast" and "slow" degrees of freedom of molecules. In my opinion, their technical trick from 1927 could be viewed as a direct ancestor of the conceptual paradigm of the Renormalization Group from the 1970s.

As Robert emphasized in the comments and as I mentioned in a recent text about John Wheeler, Oppenheimer was the first guy to realize in 1939 that black holes simply have to form if a star is too heavy.

I won't talk about various nuclear reactions he discovered, such as the Oppenheimer-Phillips process (1935).

As a Harvard undergraduate, he officially never studied physics. ;-) Nevertheless he saw a thermodynamics class by Percy Bridgman, a Nobel prize winner, and decided that he liked experimental physics. So what do you think is the next step when you decide that you like experimental physics? Yes, he learned Sanskrit in 1933 :-) and read Bhagavad Gita in the original, a book that has profoundly shaped his life philosophy, as he said later. For example, look how he used the Indian culture to describe a special moment in July 1945 that he helped to realized:

Europe OK, let us return back to the 1920s. Robert was encouraged to study in Europe because the U.S. science education was not yet at the top in the 1930s. He went to work under the old J.J. Thomson in Cavendish, Cambridge, U.K. Now, imagine the guy who is in love with Sanskrit, Greek, French literature etc. in the lab. Well, it wasn't a perfect combination. So eventually he was wisely redirected to Max Born in Göttingen, Germany. Here he became a friend of Werner Heisenberg, Pascual Jordan, Wolfgang Pauli, Paul Dirac, Enrico Fermi, and Edward Teller. He was very fast and very enthusiastic in discussions. Because he sometimes overrun the seminars, a group of slower students wrote a petition that Oppenheimer should shut up. :-) Of course, Born would never ask his student to accept such a thing. Instead, he left the petition on his (Born's) table and Oppenheimer saw it which was enough. Oppenheimer got his PhD at the age of 22. A committee member was happy it was over because it looked like Oppenheimer was going to question the professor which could probably reveal some gaps in his knowledge. ;-) The Born-Oppenheimer approximation is among a dozen of papers that Oppenheimer wrote in Göttingen. Back to America He returned to Harvard for a while but accepted a junior faculty job in Berkeley (after being diagnosed with a mild case of tuberculosis) where it was a "desert" (intellectually) so he used to spend some time at Caltech not to be isolated. At Caltech, he became a good friend of Linus Pauling and they planned to crack the mysteries of chemical bonds. However, Robert's chemical bond to Ava Helen, Pauling's wife, was even stronger which is why the first Pauling-Oppenheimer bond was cut completely (by Pauling). ;-) Oppenheimer later offered Pauling to lead the chemistry section of the Manhattan Project but Pauling decided he was a pacifist (a jealous one). :-) In the Netherlands, Oppenheimer was lecturing in Dutch, apparently needing just minutes to learn the language. He was nicknamed "Opje" - later anglicized to "Oppie." Wolfgang Pauli whom Oppenheimer admired helped to refine Oppenheimer's math skills (in Zurich, Switzerland). At Berkeley, he was admired as a a virtuoso with broad interests. Hans Bethe emphasized that Oppenheimer was a star in identifying important problems. Speed, focus on important problems, eclecticism, and other things contributed to Oppenheimer's being viewed as the father of the American school of theoretical physics. Psychology You may see that Oppenheimer was quite a personality. Correspondingly, he was also unusual psychologically. This thin chain smoker who needed physics more than friends was often frustrated and didn't eat when excited or depressed. During a conversation, he tried to strangle his friend Francis Ferguson. In private interactions, Oppenheimer was hypnotic; in public settings, he was frigid. The first group including his students admired him as a genius and an aesthete; another, less valuable group viewed him as a pretentious and insecure poseur. Politics Oppenheimer deliberately avoided any political issues until the late 1930s. He inherited USD 300,000 (equivalent: almost USD 5 million in 2008 dollars) from his father in 1937 and donated a lot of money to both anti-fascist as well as far-left movements. That has led to problems during McCarthyism even though he has never joined the Communist Party, unlike his wife Kitty Oppenheimer (and her former spouse), Robert's brother Frank (and the brother's wife), and many students of Oppenheimer including Joe Weinberg, Giovanni Rossi Lomanitz, David Bohm, and Philip Morrison. In comparison, he was apparently an island of moderate democracy within a vitriolic communist ocean. Edward Teller has incorrectly stated that Oppenheimer was a member of the Communist Party. Nevertheless, I find Teller's key comment that Oppenheimer was a security threat to the U.S. justified. But what kind of an extreme leftist could the father of the atomic bomb be from the contemporary viewpoint? The contemporary leftist movement would dismiss him as a radical far-right warmonger. ;-) Island Well, after 1954, Oppenheimer decided for a more peaceful life. Was he in big trouble because of his communist ties? Not really. He purchased the so-called Oppenheimer Beach in the island of St John in the Virgin Islands and was sailing with his wife. However, he only had 2 years left after he was diagnosed with throat cancer in 1965.
Luboš Motl v 9:00 AM
Share