Slovak tiger will join the eurozone

The European institutions have decided that Slovakia has everything it needs to join the eurozone since January 1st, 2009. Most importantly, most of our Slovak brothers (and, for the U.S. readers, I also mean sisters) want to.

The nation will become the second post-socialist (and second Slavic) member of the eurozone after Slovenia. The rate around 30.126 SKK per EUR (this is the value decided at the end of May) should be fixed during the summer. 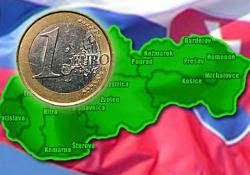 I am a kind of Euroskeptic and maybe even a Euro-skeptic. But it is sort of exciting to imagine that when we will visit our Eastern neighbors, we will pay with the Western European currency. ;-)

These banknotes will go extinct, including the SKK 1,000 bill with the "semi-fascist Catholic" politician Andrej Hlinka, using the words of a U.S. prosecutor at the Nuremberg trials. ;-)

After the Velvet Divorce, the Czechoslovak crown was smoothly split into the Czech crown (CZK) and the Slovak crown (SKK) at the beginning of 1993. The original rate was 1:1:1 but 1 CZK has been around 1.25 SKK (plus minus 5 percent) for many years (and today).


Czechia is likely to wait for many years because there is no enthusiastic support of the currency union in the country. In the title, I chose the term "Slovak tiger" because the Slovak GDP growth was above 10% in 2007. I don't think that they will catch up with Czechia any time soon - their GDP per capita continues to be 25% below the Czech one - but their economy is doing very well, anyway.