This is the graph of the day, discussed at Climate Audit. 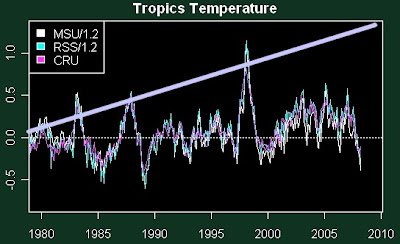 The three complicated colorful lines are the temperature data for the tropical troposphere - where the warming should be most rapid - according to RSS MSU, UAH MSU, and CRU: they seem to almost fully agree with each other. In terms of words, there has been no warming over there since 1980.

The thick, light blue line is the approximate average theoretical prediction by the garden-variety greenhouse models. Note that the IPCC predicts a warming of nearly 3 °C per century on the surface which should mean almost 5 °C for the hot spot in the tropical troposphere.


Compare the wiggly curves with the thick, light blue line. Al Gore should now ask his favorite question: Did they ever fit together? Most ridiculous thing I ever heard. The relationship is very complicated, but there is one relationship that is more powerful than all the others and it is this. When there is more carbon dioxide, the temperature of the tropical troposphere doesn't give a damn. :-)

Because Ross McKitrick proposed to quantify his T3 carbon tax according to the wiggly curves, it seems that the tax would still be zero.

Meanwhile, as Eric Berger explains in the Houston Chronicle, the ecofanatics are going to "improve" the climate research by abolishing William Gray's group that forecasts the hurricane activity. The reason? William Gray doesn't lick their a**es. These greenhouse creatures are truly disgraceful organized criminals, a form of mafia or a successor of NSDAP.
Luboš Motl v 9:22 PM
Share