I just want to say that the annualized GDP growth rate in the first quarter of 2008 was just announced to be 0.9%. The advanced reading was 0.6%, just like in the previous quarter.

That happens after all those big words (and 14,700 pages) about the very great depression in the U.S. Some people simply need big, sensational, and preferably negative events to fill the vacuum in their skulls and if they cannot create anything interesting in the real world, they are creating big stories in the virtual reality. 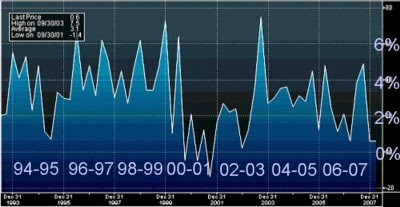 I guess that the GDP growth in the U.S. and other key countries will continue to be positive in the following quarters, too. Even if it slightly drops once per several years, I don't think it is exactly a reason for hysteria. Moreover, the private sector added jobs in April again, the Chicago PMI index increases, and so on.


Similar comments apply to other "crises" that we have been hearing about such as the situation in Iraq. Once it stabilized, you don't hear about Iraq too much in the media. It's just not interesting for them.

Or Britney Spears. You only read catastrophes about her. And look here - a soap opera from March 2008. She's a damn good (and relaxed) actress, isn't she?
Luboš Motl v 2:34 PM
Share