Boris Johnson: Kill a cow and save the world 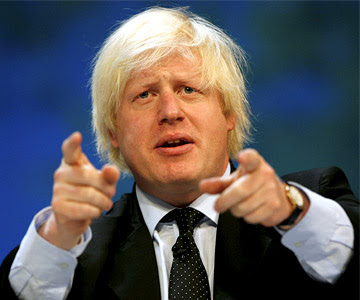 Boris Johnson has been elected mayor of an English city whose name happens to be London. ;-) Here is his somewhat entertaining perspective on the religion of global warming:

If you want to be green, kill a cow

And here is one more article by the same author about the same topic:

We've lost our fear of hellfire, but put climate change in its place

Johnson is particularly scared because his mother-in-law was no one else than Gaia (Gaia Servadio, mother of his first wife Allegra Mostyn-Owen). ;-)


They have been making fun out of him (and so was he) but he ran an original campaign focusing on crime and openness and he won.

But of course, truth to be told, he also dressed a green shirt to make his city greener and nicer and, less importantly, to produce less CO2. ;-)
Luboš Motl v 11:45 AM
Share