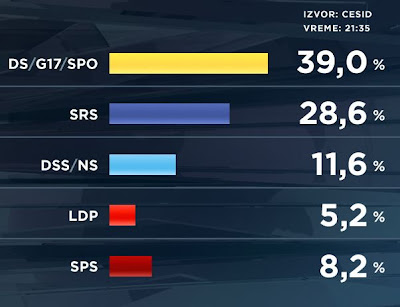 The results above are preliminary but it is unlikely that SRS, the Radical (Nationalist) Party, can eliminate the 10% gap. Moreover, LDP, the party of the "Serbian Obama" Jovanovič and the only bloc that accepts the Kosovo independence, has a big chance to make it into the Parliament.

This Gentleman was probably voting for DS, too. ;-)

Koštunica's DSS is around 12% right now. It is likely that Tadić's DS will be able to make a "small" coalition either with DSS or with the post-Miloševič SPS, the Socialists (if you also include 4 Hungarian minority deputies) - and no one else. DS and LDP is probably not enough. I don't think that the victory of the SRS would be a tragedy but in my opinion, the Serbian voters have nevertheless shown their maturity and the ability to think rationally in somewhat difficult times.

I am also impressed that the result of SPS is worse than the typical results of the Czech communists and I would definitely support their membership in the EU.

In the 250-strong Parliament, the expected composition will be:
DS+LDP+Ethnic groups is 3 votes short of a majority.
Luboš Motl v 10:03 PM
Share