Jester from CERN who is a boson himself (well, at least one half of the time) helped to discover

I've made the lists more complete than Jester. 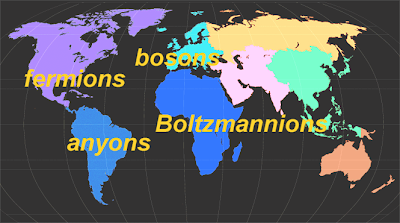 A map: Sorry if you think that anyons and especially Boltzmannions don't exist: continents' potentials are influenced by the laws of Nature.

One can easily see that the SSC would have discovered gauginos (gluinos, neutralinos, or charginos), gravitinos, or higgsinos (and maybe even some preons?) while the LHC will obviously discover the Higgs and maybe also the squarks, sleptons, Z' gauge bosons, axions, gravitons, and/or KK gravitons. Mini black holes should be discovered in Greenland because they are bosons and fermions 50% of the time, respectively.

I wonder why the physicists-seers - Alejandro Rivero, Lee Smolin, Sundance Bilson-Thompson, and others who have studied "physical" patterns very similar to this one throughout their lives - have never discovered Pauli's other principle. ;-)

Garrett Lisi organized a conference in Prague. Instead of talks, they went surfing. You might think that it is difficult to find the waves on Vltava in the middle of Prague but everything can be solved: