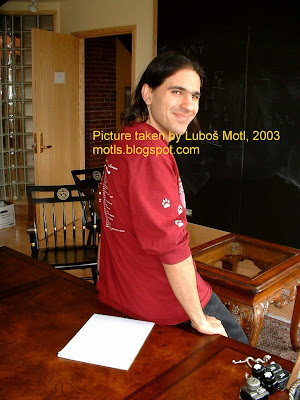 CNN has a fun story, Colliding with Nature's best-kept secrets, about the LHC and about Nima who predicts extra dimensions to be seen at the LHC. The article has just become the most popular article at the CNN website. (It's also the most e-mailed one.) The Reference Frame wishes Nima, Savas, and Gia a lot of good luck. :-)

Nima starts to talk about the LHC collider and fundamental physics in 2010 at 4:45. The video is from the lecture at the Perimeter Institute, Canada, in 2007.

The picture used by CNN (currently on the main page of cnn.com), the best picture of Nima in the world, was taken by your humble correspondent, of course. :-) The label "Courtesy Nima" is somewhat bizarre.

But other things besides photographs have their history, too. For example, the extra dimensions were introduced to physics by Theodor Kaluza and Oskar Klein.


The existence of extra dimensions in string theory was first calculated by Claude Lovelace who became the first man to know that D=26 is the critical dimension of the old, bosonic string theory.

Kaluza and Klein are dead and Lovelace is very old. I am afraid that Randall and Sundrum could be more sad that the CNN story forgot about them. ;-)

More seriously, despite the apparent superficiality, I am very happy that a serious big shot physicist (with more than 15k citations) is presented in the media at least once.

Search for Arkani-Hamed or Nima on this blog...