Greenpeace is occupying the spot height 718 i.e. the locus of the planned missile defense system radar near Míšov [mee-shoff], a village in the Brdy Hills, Czechia. They live in three apartments in the trees (which makes it somewhat harder for Pentagon to remove them). They eat ratoons, barberries, and candybars. Two solar panels guarantee that they can read this blog. 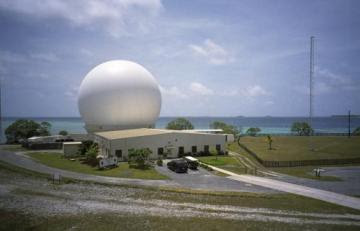 They are building the so-called Summit Bridge that "makes them uniters, not dividers" (you can see that they like George W. Bush) and the police decided not to bother them in the forbidden area.


Some tourists only go there to have some fun. But we have visited the place to convince Greenpeace that it was a good idea to host the radar. While some of the local people - e.g. Mr Jiří Houška of Trokavec near the Totem here (who votes for the Communists because the Greens became too pro-imperialist) - dislike America and prefer to repeat anti-imperialist slogans, it was more pleasant to deal with Greenpeace. Together with my father, we explained them the importance of America for our national interests, possible threats in the world, and the peaceful, intimidating role of the missile defense system. 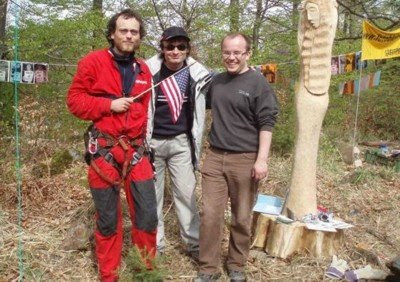 Jan Rovenský, Czech Greenpeace Climate Boss, on the left, one of his comrade on the right, and your humble correspondent in the middle.

And here you already see three fans of the U.S. next to the Greenpeace Totem: that's exactly the place where the radar should be built.

On the picture, your humble correspondent is in the middle while the guy waving with the U.S. flag on the left side (too bad that you can't hear the people singing "Good morning, Mr radar, we couldn't wait") is the Czech Greenpeace #4, Mr Jan Rovenský, who also lives on the tree. He recognized me soon after we arrived there, because of global warming. The Greenpeace occupation zone is one of the places where my fame significantly exceeds the average. ;-)

Of course, we have also had a nice chat about environmentalism and climate change. He was happy to hear that I agree that an elevated concentration of CO2 contributes to the temperature by a nonzero amount and I was happy to hear that Václav Klaus, the Czech president, has made valuable contributions to the climate debate in the Czech Republic. And he has said many other sane things, too.

Too bad that e.g. RealClimate.ORG has no one who is as moderate as the official of the Czech Greenpeace. ;-)

While most of the Czech population tends to be slightly negative about the radar, there also exist early speculations that Czechia could eventually host both the radar as well as the missiles themselves (instead of Poland). From an administrative viewpoint, it would be a cleaner solution, I think.