The first LASER started to operate on May 16th, 1960 at Hughes Research Laboratories. Theodore Maiman was the guy behind it. He died one year ago.

In my opinion, the most important discovery that has led to the LASERs was the 1917 paper by Einstein, "On the Quantum Theory of Radiation", that rederived Max Planck's law of black body radiation and defined the Einstein coefficients of absorption, spontaneous emission, and - yes, this is relevant here - stimulated emission.

For those who get here by clicking at the Google LASER logo: LASER stands for "Light Amplification [by] Stimulated Emission [of] Radiation" and this phrase pretty much explains how it works. In the 20th century theory of electromagnetic fields and light, called quantum field theory, it can be shown that the probability that a particle of light - a photon with a certain direction and frequency - is radiated (recall, hot object tend to shine light) is proportional to the number of photons that are already flying there (plus one).


LASER is a special gadget where atoms are "excited" and they wait to be able to throw photons (light) around. When they do so, the photons like to be flying in the same direction because the probability that they do so is higher. That's why the light from LASERs has such a sharp direction. We say that the light is "coherent".

Einstein didn't even get a Nobel prize for this amazing discovery, much like he didn't get one for relativity. Others had a somewhat easier life. 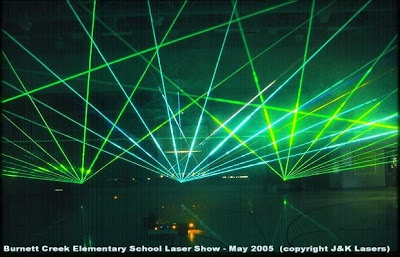 The 1964 prize was for "for fundamental work in the field of quantum electronics, which has led to the construction of oscillators and amplifiers based on the maser-laser principle".

The 1966 prize was for "the discovery and development of optical methods for studying Hertzian resonances in atoms" (optical pumping that was also needed to build the LASERs).

The 1981 prize was "for the development of laser spectroscopy".

The 1989 prize partly appreciated "the invention of the separated oscillatory fields method and its use in the hydrogen maser and other atomic clocks".

The 1997 prize was for "development of methods to cool and trap atoms with laser light" (LASER cooling).

One half of the 2005 prize was "for the development of LASER-based precision spectroscopy, including the optical frequency comb technique" while the other was for a "theory of optical coherence".
Luboš Motl v 10:21 AM
Share