Jester from CERN and Jacques Distler are making fun of an old Gentleman who used to paint landscapes. 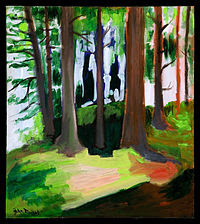 However, he couldn't earn money so he sent mail messages to Einstein, presenting himself as a disciple. Finally, John Moffat ended up as a researcher at the Perimeter Institute. ;-)

He has co-invented many things such as the Variable Speed of Light and similar nonsense. He has also copied Einstein's silly papers about non-symmetric metric tensors, presenting them as his own. (It is a silly idea because the metric tensor is a kind of potential and its antisymmetric part is something like the stringy B-field, not the electromagnetic field strength.)

In this particular story, we talk about his

about the electroweak symmetry breaking without a Higgs boson. He replaces the Higgs by a loop-induced non-locality or something like that.


Superficially, the paper must look completely OK to anyone who is not an expert in particle physics. It has the right fonts, equations, Feynman diagrams, and some references in it. ;-) However, the devil is in the details - more precisely the aspects that laymen would consider to be details but physicists know that they are essential. The mechanism behind the basic statement is virtually unexplained but a lot of time is spent with trivial points. Various numbers are written down with an amazing, clearly unrealistic accuracy.

And the most absurd points of the paper are presented as a virtue. If you know something about particle physics, you probably also know that the Higgs boson must exist for the WW scatering to be unitary. So what does Moffat do about these arguments?

Well, he says that his (longitudinal) WW scattering amplitude vanishes above 1 TeV! Yes, he says it vanishes. It's supposed to be a conclusion of a paper that computes some Feynman diagrams. Needless to say, no calculation based on Feynman diagrams can give you a function that is nonzero at some energies and strictly zero at higher energies. Jacques Distler explains that such a function would also be non-analytic which would make the whole theory non-local. It violates various bounds that follow from causality, too.

Equally importantly, once again, such a result simply cannot follow from the Feynman diagrams he drew because they always lead to locally holomorphic functions of the momenta and energies. You don't need to read the paper in detail to know that it is wrong.

Do you think he says that the vanishing is a stupidity, an absurdity, or at least a very awkward feature of his theory? Not at all. On page 1, he calls it "an experimental signature". That is the right term that can sell a complete stupidity. On page 10, he dedicates several sentences to statements how "clearly detectable" his signature will be at the LHC. ;-)

If you need to sell a manifestly wrong idea, call it "an experimental signature". It surely makes a difference, doesn't it? It is so impressive and testable and falsifiable! :-) However, you should be warned that this marketing strategy will only work for those who don't have a slightest clue about particle physics, for example for the readers of Lee Smolin's books and the pornographic excrements from Peter Whore's blog.

Particle physicists might conclude that you are getting senile. Moreover, they would be almost right but not quite because you have probably been senile for many decades. :-) At any rate, if you are writing a paper or addressing a talk to the actual physicists, you should better avoid similar "experimental signatures" and "spectacular turtles."