I would like to know what you think about John McCain's climate plan:

He says that he was converted to the global warming religion when "he saw climate change in Alaska through his own eyes." Well, I agree with him that we should stop quabbling about this issue so let me say that if I were asked to judge a senior person who says something like that on his merits, I would say that he is probably a senile nutcase.

He also wants to do all kinds of things from regulating the global temperature to reducing carbon emissions by 60% by "marked-based" regulation mechanisms that have been proven dysfunctional. 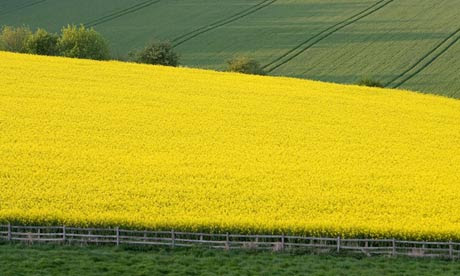 At least he is not supporting King Ethanol. The picture above is a rape seed crop field (for Czechs: "řepka olejka") that have covered about 10% of the Czech agricultural land. The yellow color is beautiful but the proportional jump of food prices is less beautiful. ;-) And it is just a "demo" without an actual climate impact that shows where the economy is going to go if we really begin to realize some of the insane plans to regulate carbon.

Climate change is not the only politically correct "hooray action", as we describe it in Czech, where John McCain has uncritically joined the far left groups. Most importantly, he is very close to them emotionally. While I could respect him for all kinds of other things, it is pretty clear that if I were a U.S. citizen, I couldn't vote for him and I would choose Hillary as a lesser evil (or maybe even as a good candidate?). She respects the principles and the people who are actually driving this modern world and yes, she is also the most manly candidate among the three.

Unfortunately, the voters won't be given this option in November.
Luboš Motl v 1:31 PM
Share