Theorists and phenomenologists represent two approaches to high-energy theoretical physics. An analogous classification could probably be applied to other scientific disciplines, too.

Phenomenologists like to focus on the bottom-up strategy, adding small pieces of knowledge to the established description of physics at low energies and thinking about many speculations how science could look like "just behind the corner".

Theorists often prefer the top-down approach and look at the whole picture, emphasizing the importance and constraining power of consistency at high-energy scales that are not accessible to existing experiments. They are ready to go through a very indirect chain of reasoning to get from their high-energy scales to the accessible regime.

The phenomenological approach turned more useful when the Standard Model was being constructed. In the last 30 years, especially with the triumphs of string theory, the theoretical approach became more successful again. And I would say that any hypothetical reversal that could be happening today or in a foreseeable future is so far unjustifiable by the actual results.

There is no universal way to say that one approach is superior. All these things depend on personal preferences and I would even say "moral values". Let me offer you the following poll.

Imagine that a scientific analysis of some data or general patterns in Nature combined with some sophisticated calculations leads you to believe that the world (or its part) may be described by one of two a priori equally likely theories. From a theoretical viewpoint, they don't differ much.

However, one theory (A) implies that the very new phenomena may be accessible by doable experiments in the near future. For example, completely new particles are predicted at 1 TeV and should be seen by the LHC.

Another theory (B) says that these phenomena are further away from such direct tests. For example, they predict the same new particles at billions of TeV. How should the non-experimental physicists react? How should they focus their efforts? 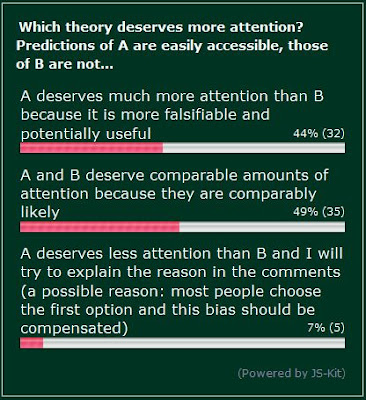 Whoops. I forgot to include two options: "A is actually more likely than B because Nature likes to show Her underwear and beyond as soon as possible (or She should)" and "B is actually more likely than A because Nature likes to hide Her secrets (or She should)". So if you vote for one of these options, please use the comments. ;-)

My answer is that the theories A,B should be given a comparable attention. This opinion of mine is not a scientific assertion. I can't prove it because science cannot tell us "what we should do". But it reflects my understanding of the scientific integrity. I view the answer "A deserves much more attention than B" to be too practical and kind of corrupt. It is usually chosen by the people who prefer interesting (or sensational) answers over true answers.

I am not claiming that I don't care about interesting (or sensational) assertions. Of course that to some extent, I do. Everyone does. But whether the statements are true or not is simply much more important for me. It seems to me that many phenomenologists focus on models that predict new phenomena "right behind the corner" simply because they are attracted by the fame and glamor (as well as money and success) that would come to them if their theory was fully proven tomorrow.

Well, these values are not really mine.

If one is doing pure science, whose goal is to find the truth, and not applied science, whose goal is to find useful things for the general public, equally likely theories should deserve comparable amounts of attention. We know the "publication bias" which is one of the manifestations of the opposite approach where interesting results are far more attractive for the researchers, reviewers, and journalists.

Global warming is an extreme example of such a bias. Predictions that are "spectacular" get much more attention than models and calculations that do not predict anything "spectacular" or catastrophic. It's an indisputable bias. Such a bias does not necessarily destroy science and (almost?) every scientist has it, to one extent or another. But when we have too much of it, it is simply bad. The scientific assertions can get completely detached from reality - I really mean from the truth. They become dominated by wishful thinking and social goals.

On the other hand, pure theorists are writing a lot of papers whose validity won't be experimentally decided for many years. But because they are driven by more universal criteria such as the overall consistency of the physical image of the world, they are much more likely to have a lasting value. Why?

The theoretical papers do not depend on the immediate experimental situation and the current opportunities for individuals to benefit.

Consequently, the theoretical papers are much more mathematical in character. If you look into the past, I think that you must agree that the conceptual papers about mathematical tools, methods, and general statements are much more useful for the contemporary science - including phenomenology - than some ancient work dominated by phenomenological, technological, or experimental details. Many gadgets and detailed methods that the scientists were using centuries ago look really silly today.

And most of the ancient scientists' thinking they could "help themselves" has been completely forgotten.

Quite generally, if you think about some insights of science that were found many decades or centuries ago, the theoretical conclusions are much more useful for us today than the particular experimental arrangement that was employed to prove the insight. And there is a lot of purely mathematical work that was once considered by some people to be irrelevant for science - such as Lie groups - but that naturally became a key ingredient of science later.
Luboš Motl v 11:03 AM
Share