... but let us begin with Dynkin, A.E. Becquerel, and Schwarzschild ...

Dynkin lived in Leningrad until 1935 when the family was forwarded to Kazakhstan because his father was politically undesirable - a hypothesis that he confirmed by his support of Galanskov and Ginzburg in 1967. However, he didn't have to serve in the war and, thankfully, could do some maths.

In his previous life, he studied Lie groups and all of us know the Dynkin diagrams, beautiful gadgets that classify Lie algebras and all mathematical systems with the same spirit. If you forgot what they are, look here: 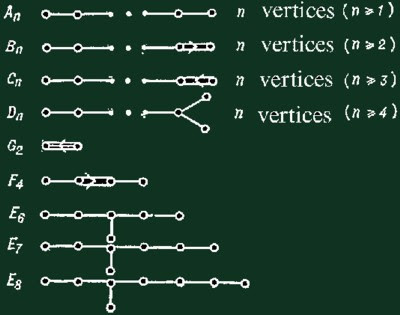 In the last 50 years, he studied statistics - since the late 1970s when he emigrated to the U.S., at Cornell University. For example, Dynkin's formula calculates the expected time when the Brownian motion leaves a ball.

Dynkin's system is a collection of subsets closed under complementation and under countable disjoint unions and it is important for uniqueness theorems in measure theory. 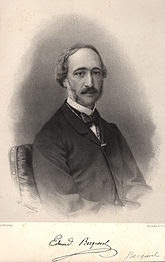 Alexandre-Edmond Becquerel died on May 11th, 1891. This French physicist studied solar spectrum, magnetism, electricity, and optics. He was the son of Antoine César Becquerel and the father of the radioactive Henri Becquerel.

In 1867-68, he wrote "Light, its causes and effects" (in French). And he also accumulated a lot of evidence supporting Faraday's law of electrolysis. 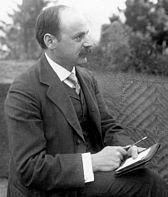 Karl Schwarzschild died on May 11th, 1916 (another anniversary) because of pemphigus, an ugly skin disease that he caught on the Russian front where he calculated the trajectories for German bullets.

However, the German Jewish physicist had to be born before that. It was on October 9th, 1873. When he was 16, he published a paper on celestial mechanics. He was interested in optics and described a power law for the optical density of photographic materials, involving the Schwarzschild exponent. He also cared about the quantum theory, instrumental astronomy, stellar structure and statistics, Halley's comet, and spectroscopy.


Schwarzschild's most important contribution to science is undoubtedly his solution of general relativity. Although Einstein used to verbally emphasize that general relativity allows us to use any system of coordinates, he talked the talk but didn't walk the walk. Einstein would always use quasi-Cartesian coordinates. Consequently, he could only solve the equations approximately.

Schwarzschild boldly used the polar coordinates and solved the rotationally symmetric problem exactly. Einstein presented the solution to the Academy. Whether or not the horizon and the singularity beneath it could have any physical substance was a controversial question for more than 20 years (Einstein himself thought that it was not physical), until Oppenheimer unambiguously claimed that the horizon has to be real because nothing could possibly stop the collapse of a heavy enough star.

Schwarzschild died a few months after he found the solution, on May 11th.

The most famous physicist who has an anniversary today is Richard Feynman who was born in Far Rockaway, Queens, NYC, exactly 90 years ago: on May 11th, 1918.

Richard Feynman was a late talker. He began to speak when he was 3. His Jewish father, Melville - who was selling uniforms - taught Richard to think critically and to question authorities. Richard may have inherited the sense of humor from his mother, Lucille.

As a kid, he was fixing the radios. By 15, he mastered differential and integral calculus. At the high school, he invented a good fun to Taylor-expand functions of operators. At the end of the high school, he won a math contest (by a huge margin). He applied to Columbia University. But as you know, Columbia University - although it has some good people - is full of far-left hacks, aggressive cranks, and political zealots. It was no different in the late 1930s and Feynman was rejected because of their Jewish quota.

Happily, he went to MIT, a school he loved, where he received his bachelor's degree in 1939. He became a Putnam Fellow and went to Princeton University where he worked with his advisor, John Wheeler. They played with the attempts to regulate the electron's self-energy. These games have eventually led to the correct causal structure of the Feynman propagator. Feynman's first seminar was in front of monster minds - Einstein, Pauli, von Neumann. His PhD thesis showed why the action was relevant to quantum mechanics - a bunch of ideas that have led to the path integrals and Feynman diagrams.

I believe that Feynman's activities, achievements, opinions, and stories are too well-known so I won't write about his active role in the Manhattan project, his love who had tuberculosis, picking locks, friendly prostitutes, drums and samba, famous lectures on physics, pioneering dreams about quantum computers, work on superfluid liquid helium, anger about pompous fools, collaboration (model of weak interactions) and rivalry with Gell-Mann, his concept of partons, his discovery of the Faddeev-Popov ghosts, Feynman's derivation of Feynman rules for general relativity, his investigation of the Challenger tragedy, "too old" Feynman's comments about string theory, or his own fight against cancer, besides thousands of topics I forgot.

Instead, I will recommend you additional links besides those found in this paragraph: