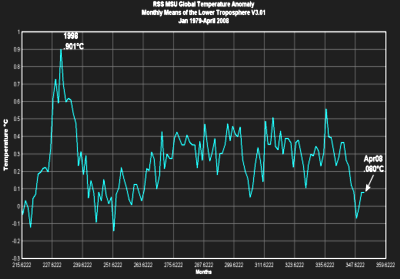 The fastest warming in that period, by nearly 1.0 °C, occurred between 70°S and 60°S - the Southernest strip they measure, and in the continental U.S., by 0.6 °C. The 20°N-20°S tropical strip has warmed up by about 0.05 °C, too as La Nina is weakening, converging towards neutral ENSO conditions in a few months.

John Reynolds has pointed out that UAH MSU has released their new satellite results, too. And they are rather different. April 2008 was 0.074 °C cooler than March 2008. The Northern Hemisphere cooled down by 0.25 °C.

The most significant difference comes from the tropics. While RSS MSU announced month-on-month warming, UAH claims a 0.04 °C of cooling, leading to the anomaly of -0.531 °C, the coolest reading since March 1989.

HadCRUT3 confirms UAH's 0.07 °C of cooling between March and April.

GISS plus sea surface temperatures, managed by James Hansen et al., reported a much larger 0.21 °C cooling between March and April but you should appreciate that their March reading was insanely hot so they just return closer to the trend lines observed by other teams.
Luboš Motl v 6:15 AM
Share