Future article about a similar topic: war in South Ossetia

Some people are beginning to talk about a war. Although I find these comments highly premature, it is an explosive region. 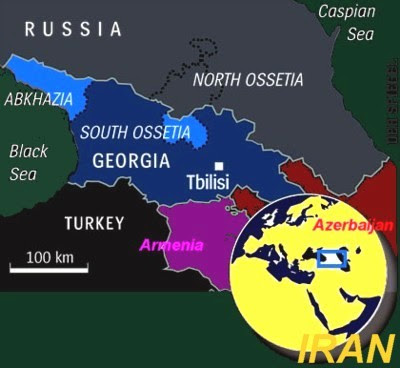 Look at the map. Start with the yellow disk, a global perspective. We are discussing the piece of land (blue rectangle) in between the Black Sea and the Caspian Sea. There are Caucasus Mountains over there as well as many cacophonic pairs of nations. The region is as dangerous for the peace as the Balkans on the opposite side of the Black Sea. Note that Iran would have made it to the picture, too. Moreover, there is also Armenia & Azerbaijan as well as Chechnya on the East side of North Ossetia (inside Russia). ;-)

The main players right now are Russia with 140 million people, Georgia with 4.5 million people, and its province, a de facto independent Abkhazia with 170,000 people (just like Pilsen). They have been parts of the Soviet Union for nearly a century but they don't love each other right now.

Russia has USD 15,000 GDP per capita (PPP). The other ex-Soviet nations are much poorer. Armenia and Azerbaijan have around USD 6,000 while Georgia only has USD 4,000 or so. Abkhazia has won the 1992-1993 war for de facto independence against Georgia. Despite its Southern locus, Armenia is spiritually closest to Russia (because of Christianity; Armenia was the first country to adopt it in 301).

Most people in Abkhazia prefer links with Russia over those with Georgia, in spite of their linguistic proximity to Georgia. They also use the cute Georgian alphabet (ქართული დამწერლობა). :-) On the other side, Azerbaijan (on the East) is tempted to send mujahideens into Georgia to fight against the Russian (and Christian) influence i.e. against the independent Abkhazia. Sukhumi, the capital of Abkhazia

Equally importantly, Georgia is trying to separate itself from Russia. It has applied for NATO membership. Two or four Georgian spy planes (without a crew) have been shot in Abkhazia this week. Russia is adding new troops to Abkhazia because "Georgia might try to seize Abkhazia with NATO-trained soldiers" which would force Russia to "defend its citizens" and it is upset about the Georgian plans to "betray" them. Georgian ministers say that the war is close while Russia rightfully sees Abkhazia as an appropriate revenge for the province of Kosovo that several Western countries decided to separate from Serbia, an ally of Russia.

Just two months after the U.S. does everything it can against Serbia's territorial integrity, the statement of Dana Perino - whom I otherwise like - that "the U.S. has firmly reiterated our support for Georgia's territorial integrity" sounds amusing, indeed. And I think it is legitimate for Russia to take into account the fact that the U.S. will not be able to interfere.


What do I think about the situation?

Tell me what you think but I feel that the region has been in the Russian domain of influence for quite some time and a dramatic reversal of this fact can't be easily accepted by Russia which should be an important point for the international community.

I don't really think that Georgia is a legitimate candidate for NATO membership. It is not clear to me how such a membership could be justified. Is the Caspian Sea a part of North Atlantic? More seriously, I don't think that Georgia is more Western, more democratic, or more capitalist than Russia. Why should one include Georgia but not Russia?

The plans to incorporate countries like Georgia into NATO are clearly a part of an anti-Russian policy and it shouldn't be surprising that Russia is annoyed by such plans. Georgia was kind of democratic between 1918 and 1921 and that's it. Its experience with democracy is comparable to that of Russia.

Some people in the West simply think that it is always fine to help smaller nations against Russia because these people consider Russia to be the ultimate symbol of the communist evil. I beg to disagree. Communism is linked to Russia as much as it is linked to Georgia or others. If you have doubts about this statement, let me inform you about a shocking revelation that a guy called Stalin was actually born as Iosif Vissarionovich Dzhugashvili in Gori, Georgia. ;-)

Get used to it. The Georgians are not saints. It is a similar inconvenient truth as the fact that most white racists are women while most male sexists are blacks. ;-)

Blaming the Russians as a nation for all the evils of communism is a form of nationalist bigotry. Communism is not a Russian, Serbian, or Slavic disease. It was invented by Marx and Engels and it is currently advocated by the U.C. Berkeley, among many others. ;-)

Although there have been lots of very bad things about the Soviet Union, I actually think that its treatment of nations and autonomous regions was acceptable and the internal situation was more stable than the fragmented arrangement we see today. Having too many independent yet hostile countries in an explosive region is simply a bad thing.

So I think that the West should stop irritating the Russian bear by rubbing his skin off. Except for the Baltic countries and - maybe - Ukraine, all member countries of the Soviet Union should be counted as components of the "East" i.e. the Russian domain of influence. As far as their traditions go, they are on par with Russia and they shouldn't be treated differently. Today, we deal with a different Russia than we did during the Soviet era and this subtle fact should influence our decisions, too.

The people in Abkhazia should decide whether they should be an autonomous region of Georgia or Russia - because an absolute independence would be nothing more than a formal joke because someone would have to protect such independence against everyone in the region. I think they would choose Russia. But even Georgia should be respected as a part of the Russian sphere of influence and the West should support both a healthy and realistic expansion of democracy in the region as well as good relations between these two nations (and others).