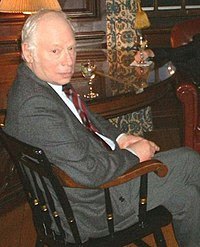 Unlike many other recent biographies on this blog, this one is fortunately very far from being complete. For example, Weinberg's latest article, about Effective field theory for inflation (see Dmitry's blog report), is less than one week old. And if you think that one week is too long a time, his latest book, 544-page book on cosmology (click the picture below, buy it, and update your most recent book of this kind from the 1970s), starts to sell today. I mean May 3rd, 2008.

If you click at the photograph, you will get to the Wikipedia page with the same picture (that I took in the Eliot House during Sidneyfest).

Steven Weinberg was born on May 3rd, 1933, in the New York City. He studied at the Bronx High School of Science - Sheldon Glashow was his classmate; Cornell; Copenhagen; and Princeton (PhD). He worked at Columbia; Berkeley; MIT; Harvard; and Austin.

We will get to science soon. But Weinberg became a leading voice of scientific atheism (video) who also argues that the world is pointless (video). His arguments with postmodern philosophers and similar pseudointellectuals are legendary. See, for example, Weinberg's comments about Sokal's hoax.

Recently, this champion of Israel cancelled a visit to the U.K. because of antisemitism. He has also defended Reagan's Superconducing Super Collider and complained about the childish policy to send men, and not robots, to outer space.


Weinberg, Texas' second most famous scientist (and particle physicist) after George W. Bush, received his 1979 Nobel prize with Abdus Salam and Sheldon Glashow for the Standard Model that describes everything in the world except for a very weak force cracked by the 1916 paper by Albert Einstein. He also gave the Standard Model its name. His 1967 paper, "A Model of Leptons", has over 6,500 citations while his total citation count exceeds 40,000, about ten kiloWoit. Weinberg is arguably the most famous physicist in various top-three citation-based lists of high-energy physics.

(I will omit dozens of other honors and awards because they suck and none of them can compare with the Nobel prize anyway.)

On the other hand, Sheldon Glashow gave name to the minimal scalar sector of the Standard Model. The sector is referred to as Weinberg's toilet because it is something that your home needs but you are not especially proud about it. ;-)

He played an important role in discovering the neutral current - coupled to the Z bosons - and the weak mixing angle that others call the Weinberg angle. The Z bosons were observed 5 years after the Nobel prize. At that time, theorists were still believed because aggressive, physics-hating crackpots couldn't yet use the power of the Internet. Weinberg's pre-QCD papers about pion scattering are not too famous today but they were extremely important at that time. He has also worked on QCD.

The Weinberg-Witten theorem shows that gravitons cannot be composite as in many hopeless "alternative" attempts to describe quantum gravity. On the other hand, the Higgs may be composite and Weinberg may be credited with the first theories with additional strongly interacting sectors that we know as Technicolor these days (the new name is due to Susskind). 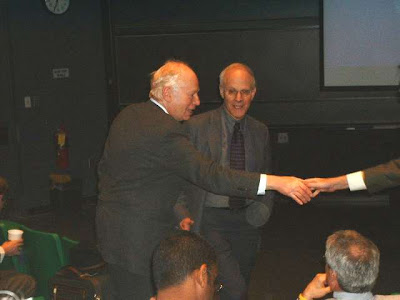 At Sidneyfest, the weak force gets unified with electromagnetism while the strong force keeps on waiting 1 meter away from them. ;-) If you think that the number of Nobel prize winners on the picture is too low, I apologize. 't Hooft is 2 meters on the left and Glashow & Wilczek are about 5 meters on the right.

Weinberg has interacted with some obsolete, confused, yet loud physicists who advocate the inevitability of torsion in general relativity. Among dumb cosmologists, Weinberg is referred to as a heretic because he dares to say something that every particle physicist knows - namely that the metric tensor is just another field. His approach apparently humiliates the special heavenly content of geometry that the proper general relativists must worship. ;-)

He also stated that the Universe as a computer statements are quickly put on the crackpot shelf of his office bookcase; the main reason why Wolfram became the first exception was that he is smart. But Weinberg debunks Wolfram's book anyway. ;-) And there are hundreds of other intellectual confrontations of this kind in which Weinberg has actively participated on the correct side.

More importantly, he is the father of (so far) the only successful prediction of the anthropic principle, a small value of the cosmological constant. If the anthropic religion has any anthropomorphic God, it is probably Him. :-) The anthropic battle is arguably his only major battle where he is on the wrong side. But as you know, he is both too important as well as very sensible in this context!

However, I can't enumerate all topics connected with Steven Weinberg. Even those that have been discussed on this blog include 56 articles as of today!

Steven Weinberg wrote a delicious 3-volume textbook on quantum field theory, especially recommended to the readers who are neither beginners nor simpletons:


The third volume is dedicated to a very modern field of supersymmetry. Weinberg has also done amazing work on cosmology - including his very recent work on cosmic inflation - and he has been one of the most prominent supporters of string theory, "our first plausible candidate for a final theory" (SW, 1993).

For example, he also wrote Foreword to Joe Polchinski's textbook on string theory. I believe that Weinberg's most cited technical paper on string theory itself is the 1987 article about the cancellation of one-loop divergences in SO(8192) open+closed bosonic string theory. It is no coincidence that 8192 = 2^13 and 13 is the spacetime dimension 26 over two! But I don't want to reproduce his paper again here even though it can be done more efficiently. :-)

Weinberg himself wrote many books (and dozens of newspaper articles). Besides the QFT textbook above, everyone knows
The second book has almost become a blockbuster. More importantly, it has inspired many physicists to put together a detailed theory of nucleosynthesis.

A decade ago, I have also read his Dreams of a Final Theory. It may look somewhat dry to the reader but it is a perfectionist book about the philosophy of science where one could subscribe to everything. The Universe is probably dry, too. ;-)