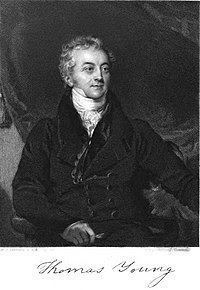 Thomas Young was a British polymath who died on May 10th, 1829. He achieved a lot in the research of energy, solid mechanics, light, vision, physiology, medicine, music, and Egyptology.

He was born on June 13th, 1773 to a Quaker family. The children were like dimensions of the superstring and he was the eldest of these ten kids. ;-) When he was fourteen, he knew Greek and Latin and understood some French, Italian, Hebrew, Chaldean, Syriac, Samaritan, Arabic, Persian, Turkish, and Amharic. I don't even know that four of these languages existed.

He studied medicine, obtained a physics PhD, and inherited the estate of his grand-uncle that earned him financial independence. To protect his reputation as a physician, he published articles about medicine anonymously. Because of his medical practice, he also resigned as a professor of natural sciences (1801-1803) at the Royal Institution.

He has worked on many practical things including the dangers of gas infrastructure in London and life insurance. John Herschel, Albert Einstein, Lord Rayleigh, and Philip Anderson considered or consider themselves admirers of Young.


In 1807, he described elasticity of materials by Young's modulus, the characteristic ratio of stress (pressure) of a material and the associated strain (relative change of the length). That was quite important for engineering. In an equation independently derived by Laplace, Young understood capillary phenomena via the principle of surface tension which also allowed him to write down the Young-Dupré equation for the contact angle of droplets (without the Dupré thermodynamic dependence). Young was the first scientist who used the term "energy" in the modern sense.

Thomas Young has also revolutionized our understanding of vision. He figured out that there had to be three kinds of nerve fibers - red, green, violet (...) - on the retina for us to see colors. Experimental tests of this Young-Helmholtz theory occurred more than 50 years later. He also understood that eyes look at different distances by changing the shape of the lens. In 1801, he was the first man to describe astigmatism.

As a physician, he designed phenomenological rules for a child's drug dosage based on its age.

As far as languages go, he proposed a universal phonetic alphabet (with 16 pure vowels (!), among other symbols). As a linguist, he compared the grammar and vocabulary of 400 languages. In 1813, he revived the term Indo-European languages first coined by van Boxhom in 1647.

Young was the first one who tried to decipher Egyptian hieroglyphs. But he and his collaborators were naively imaginining that the texts were both phonetic and literal. Champollion didn't want to share the credit when he cracked the code. However, Young constructed a method to tune musical instruments, Young temperament.

His contributions to the wave theory of light will be discussed at the bottom. 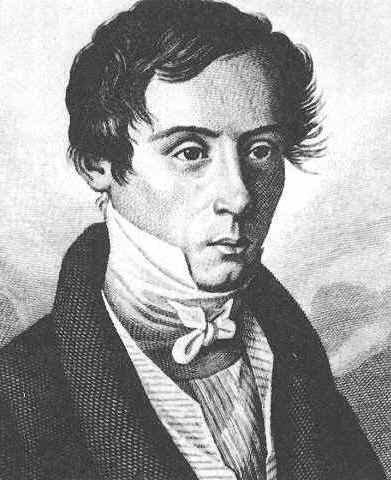 Augustin-Jean Fresnel was born 220 years ago, on May 10th, 1788, to the family of an architect. Unlike many other famous physicists, he was no child prodigy.

When he was around 8 years old, he finally learned how to read. He studied at various schools and served as an engineer.

The year 1814 was rather important. First of all, he supported the Bourbons which became a reason why Napoleon's people fired him later. More importantly, he began to write important papers about light.

A paper on the aberration of light (a correction to the apparent position of objects due to the finite speed of light) was rejected. A later memoir about diffraction (bending of waves around obstacles, leading to complex interference patterns) written in 1818 was more successful and earned him a prize in Paris. He was elected to various academies in Paris and London.

As a manager of lighthouses, he constructed Fresnel lens that replaced mirrors. He never became famous but in 1824, he wrote the following to Young:

In myself, that sensibility, or that vanity, which people call love of glory had been blunted. All the compliments that I have received from Arago, Laplace, and Biot never gave me so much pleasure as the discovery of a theoretic truth, or the confirmation of a calculation by experiment.

Young and Fresnel: research of wave theory of light

Because the research of wave theory of light by these two guys is interlinked, let me discuss it simultaneously. The most important achievement was arguably Thomas Young's double-slit experiment with light but I can't write much about it because people are not even quite sure whether he actually did it back in 1801. ;-)

Today, we know that light is a transverse wave. As recently as 1817, people thought that light was a longitudinal wave, much like sound. Thomas Young didn't quite revolutionize this particular situation but he helped to slowly improve it, anyway. He said that light had a small transverse component besides the dominant longitudinal component. :-) Finally, Fresnel managed to eliminate the ludicrous longitudinal component completely in 1821 because he realized - purely theoretically - that it was essential to explain polarization of light.

Fresnel was able to improve the geometry of some previous experiments (by F.M. Grimaldi) to reduce diffraction and pick the pure interference only.

Many insights in wave optics are named after Fresnel, including:
The Fizeau experiment in the 1850s verified Fresnel's predictions for speed ratios of light in moving water. Michelson and Morley (and Zeeman) liked to replicate it, too.

The Huygens principle - the concentric round waves around each point that was hit interfere with all others - is often referred to as the Huygens-Fresnel principle.
Luboš Motl v 8:20 AM
Share