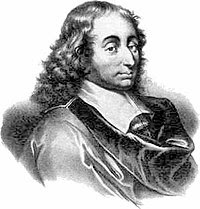 Blaise Pascal was born on June 19th, 1623, to a father who was an aristocratic judge with interest in science and maths and a mother who died when Blaise was 3 years old.

Pascal has made his most famous breakthroughs in the physics of fluids, construction of calculators, religious philosophy and theology, and modern economics and social science. Not a bad record for a guy who was ill throughout his life and who died before he was 40. (His stomach and even brain was damaged, probably due to some combination or variation of stomach cancer, tuberculosis, and brain lesion.)

The child prodigy was educated by his father. When Blaise was 11, he wrote a treatise on the sounds of vibrating bodies. He shouldn't have done that because his father was so afraid that Blaise would become a string theorist and his study of Latin and Greek would be compromised that he forbade Blaise to pursue maths until his 15th birthday. ;-)

However, when Blaise wrote his own proof that the sum of angles in a triangle equals 180° a year later, the ban was lifted. Blaise the kid could suddenly study Euclid and even participate at gatherings of thinkers such as Roberval, Desargues, Mydorge, Gassendi, and Descartes in a monastic cell.

Desargues worked on conic sections and Pascal was thrilled. Decartes didn't want to believe that some of the "conic" findings were due to Pascal Jr and not Pascal Sr. ;-) When Blaise was 15, his father's assets dropped from 66,000 to 7,000 livres. Moreover, the father had to leave Paris for political reasons. His three children were left with Madame Sainctot, an attractive and achieved prostitute. 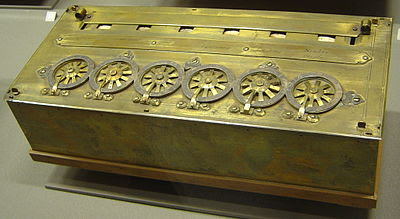 The father was eventually pardoned and began to calculate taxes owed and paid again.

Blaise, now 18+ years old, was so compassionate that he invented the Pascaline or Pascal's calculator to simplify his dad's life. The gadget that could add and subtract was a breakthrough, at least from our present viewpoint, but it wasn't a commercial success. One of the reasons was that it wasn't easy to produce it. About 50 prototypes have been made within a decade or so but only 15 or so were sold. Compare e.g. with Playstation 3 that has sold 13 million devices.


But because of the pioneering role that the Pascaline has played, it is natural that an important programming language was named after Pascal.

Pascal's triangle, a convenient method to write down the binomial coefficients, was written down in 1653, when Blaise was 30. Well, this particular achievement doesn't seem too revolutionary for a 30-year-old genius to me.

One year later, Pascal began to study game theory and probability theory carefully. He introduced expected values and other notions and his and Fermat's work on probabilities surprisingly inspired Leibniz when he was formulating (his version of) the infinitesimal calculus.

In philosophy of mathematics, Pascal dreamed about the new truths being derived purely from the truths that have already been established. He realized that such a utopia is not really possible and decided that the deduction building on an axiomatic system, using the modern terminology, is the best possible scheme you can get.

Moreover, the ultimate axioms cannot be proved rationally and a reference to intuition (and even God) will therefore be forever essential. He presented the axioms of geometry to be an example of the optimal framework balancing the axioms with deduction. Pascal also emphasized that only definitions that are written down by a writer to simplify his life - and that don't depend on external understanding by everyone - are meaningful in science.

Pascal always suffered from a nervous ailment. But a paralytic attack in 1647 disabled him so that he couldn't move without crutches. He needed to heat up his legs all the time. His sister Jacqueline helped to cure him physically but the nervous problems remained. Add hypochondria, his father's broken hip in 1646, and a lot of other problems to get the gloomy picture.

The whole family were close to Jansenism, a branch of the church that emphasized the original sin, divine grace, and destiny. After the father died in 1651, the relationships between Jacqueline and Blaise turned worse, then better, but Blaise was not a full-fledged believer at that time.

However, in 1654, months after he studied game theory and probability, Pascal had a religious experience that largely made him give up mathematics. What happened on November 23rd, 1654?

He probably participated in a traffic accident involving horses. Although he escaped without any consequences for his health, the sensitive thinker fainted away and became unconscious for a while. Fifteen days later, he apparently received a call from God. Pascal wrote: "Fire. God of Abraham, God of Isaac, God of Jacob, not of the philosophers and the scholars..." and concluded with "I will not forget thy word. Amen" from Psalm 119:16.

The document with these "insights" is known as the Memorial. Pascal was careful to have it in his clothes all the time. In 1656, he began to write religious texts. For example, in The Provincial Letters, he attacked casuistry, the popular Catholic relativistic moral teaching that things are ethical or unethical depending on their context (case). The morally relativist king ordered the book to be burned and shredded in 1660.

Pascal's text was not just a principled yet controversial treatise about ethics. It was also a fun reading. It influenced Voltaire and Rousseau, too.

The religious experiences didn't end in 1654. In 1657, Pascal's 10-year-old hopelessly ill niece was miraculously cured after some believers kissed a crown that has tortured Christ. The scientific consensus of that era, including the Catholic Paris and the Pope, have confirmed that it was an actual miracle from the same universality class as those described in the Bible. ;-)

With a lot of new religious energy, Pascal himself began to write The Pensées, a book defending Christianity that he never completed. His aim was to deduce so powerful contradictions and terrible conclusions out of stoicism and skepticism that the non-believers would be driven up the wall and accept Jesus Christ. ;-) 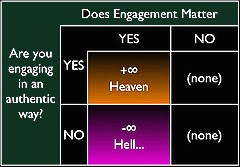 For example, Pascal's Wager is the suggestion that it is better to bet that God exists, even if He doesn't, because you may gain (almost) everything but you will lose (almost) nothing. At any rate, the expectation value (based on God's uncertain existence) of the profit is higher if you believe in God because you gain infinity if you believe in Him and He exists.

Pascal's argument was recently revived (or stolen?) by some mad global warming alarmists at YouTube (the devil version) who (ludicrously) claim that you lose infinity if there exists AGW and you bet It doesn't exist. ;-) Good enough a performance to attract 4+ million stupid viewers and to promote the silly "precautionary principle". The average rating of the videos is 4.5 stars, raising concerns about a possible genetic collapse of the mankind.

From the naive YouTube alarmist, whose name happens to be Greg Craven and who is a high school teacher if you care, Pascal's Wager was further re-stolen by Ross Garnaut, the left-wing Australian government's climate guru. :-)

The Australian endorsement happened yesterday. As you can see, Pascal's ideas are hot every day even 385 years after his birth. If climate science keeps on evolving in the current direction, Pascal's post-1654 (religious) ideas will become more important for the discipline than the pre-1654 (hydrostatical) ideas discussed below. ;-)

Pascal has always been an ascetic, convinced that it was natural and necessary for man to suffer.

The SI unit of pressure is also named after Pascal. Why? Let us return before the conversion, to his previous, scientific incarnation.

Around 1646, Pascal already knew everything about Evangelista Torricelli's experiments. Take a tube filled with mercury and turn it upside down in a bowl. At some height, you see the vacuum. Most scientists thought it wasn't vacuum. Why? Simply because the vacuum was impossible! It was impossible because of some idiotic dogmas by Aristotle.

Because light can apparently penetrate (move) through the vacuum and any motion must be caused by something, as Aristotle declared, there can't be vacuum in the vacuum region above the mercury! ;-) This sloppy thinking reminds me of some recent musings about "relationism" and "background independence".

While I admire the ancient Greek and Roman science and societies, I am always amazed how horrible impact on scientific reasoning Aristotle's legacy has had. Five hundred years ago, the Catholic Church has done a lot of things against science but some of the really bad "weapons" were bought from Aristotle.

Aristotle's teaching is the greatest example of dogmatic natural philosophy. One writes seemingly "natural" theses, for example "every motion must be caused by something", and derives all kinds of conclusions - such as the non-existence of the vacuum - without ever asking whether the assumptions and the implications are valid and what they exactly mean and what they don't. There is never an attempt to remove the vagueness and to critically test an idea.

Pascal was more sane. He realized that conjectures in science can be easily falsified: one wrong prediction is enough. He wrote: "In order to show that a hypothesis is evident, it does not suffice that all the phenomena follow from it; instead, if it leads to something contrary to a single one of the phenomena, that suffices to establish its falsity."

At any rate, Pascal didn't buy this "vacuum doesn't exist" stuff, driving people like Descartes up the wall. He not only explained why there was vacuum above the mercury but he told us much more about the workings of fluids. He discovered Pascal's law - namely that fluids propagate the pressure into all directions. The pressure is thus a scalar. Moreover, he knew that the pressure [difference] is equal to "[delta] h rho g". The pressure is proportional to the height - which is exactly what allows you to use the tubes with mercury as barometers.

Some of the experiments proving Pascal's statements were carried out in 1646 and 1647 by himself and in 1648 by his friends. He reproduced many of them. The picture on the left side shows Pascal's barometer in 1646 located in Rouen, France.

Blaise Pascal was an extraordinary 17th century thinker whose life shows a lot of the darkness of the Middle Ages and his personal difficulties but whose discoveries helped to pave the way for hydrodynamics, modern computers, modern economics, modern social science, and modern philosophy of science. He didn't build the Eiffel Tower but did a lot of other things. ;-)

Aage Niels Bohr was born on June 19th, 1922. This son of Niels Bohr was good enough a nuclear physicist to receive a Nobel prize, too. The 1975 physics prize was shared by Bohr's son and Motl's son, as well as Leo James Rainwater. OK, I admit that Motl's son should be spelled [Ben] Mottelson... ;-)
Luboš Motl v 9:13 AM
Share