Today, there are many interesting papers on the hep-th archive.

For example, there are three or four papers about the membrane minirevolution. That's quite an impressive daily rate but I am going to keep the word "minirevolution" for a while. ;-)

Miguel A. Bandres, Arthur E. Lipstein, John H. Schwarz elaborate on the idea I wrote a month ago. The negative, ghost direction of the 3-algebra can be eliminated from the scratch by a gauge symmetry. More concretely, they gauge the symmetry of shifting a light-like scalar in the algebra by a constant, through the addition of an unphysical (Stückelberg) gauge field. Incidentally, gauge-fixing of this symmetry at generic points of the moduli space breaks the conformal symmetry and makes the theory equivalent to super Yang-Mills. But you don't have to gauge-fix it like that.

Jeong-Hyuck Park, Corneliu Sochichiu show how you can derive the BLG Lagrangian by Polyakov's methods. Just like you can get rid of the square root in the Nambu-Goto action to obtain the Polyakov action for a string, you can do a similar thing for an M5-brane. You end up with the squared 3-bracket that you recognize as a term in the BLG Lagrangian for M2-branes. Other terms work, too.


Filippo Passerini discusses the central extension of the SUSY algebra in the BLG theory for M2-branes. The central charges (related to other M-brane configurations) transform as the 2-form, 28, and the self-dual four-form, 35+, of the transverse SO(8) symmetry and they are included in the Lagrangian.

Finally, we reached the 200-page paper by

What are their rules of the game? They follow the bottom-up idea initiated by Aldazabal, Ibanez, Quevedo, and Uranga (AIQU) in 2000 and study the F-theory counterpart of what we somewhat recently discussed as the Verlinde-Wijnholt (VW; it's not Volkswagen) quiver standard models. Recall that the 4D Planck scale is way above the scales associated with the other three forces. So gravity seems almost "decoupled" and it is rather natural to assume that this decoupling may have a geometric interpretation because string theory has a lot of room for geometric interpretations.

Recall that in the normal SUSY model building, the hierarchy doesn't have such an interpretation: the low scales are generated by "four-dimensional field theory" methods (that string theory also offers, of course) - by a nearly perfect cancellation of the Higgs mass, among other things. But the geometric interpretation could exist: braneworlds or the warped geometries represent two examples how the separation between the Planck scale and the Standard Model scales may be encoded geometrically in string theory (in a large transverse volume away of the branes; or in a strong curvature of a space).

In the currently discussed AIQU framework (no, it is not Volkswagen) which is an extreme version of a braneworld, the whole Standard Model is supposed to arise from a singularity in the compactification space. VW have studied D-branes on singularities described by quiver gauge theories while BHV look at F-theoretical singularities.

All five authors call the approach a "bottom-up approach" to string phenomenology because the observed low-energy (=bottom) physics of the Standard Model is assumed to be directly reflected by a well-defined geometric portion of the stringy compactification (a singularity) and they are "drawing" the compactification manifold starting from the known Standard Model (from the bottom). The Planck-GUT scale gap - an awkward thing in the top-down approach - is an assumption of the bottom-up approach. Much like regular phenomenologists, we are allowed to assume things that are pretty much known experimentally. Some people, especially the anthropic people, should try to appreciate this point! ;-)

The relatively natural assumption that the hierarchies are represented geometrically is essentially enough to derive a highly predictive framework.

The grand unified group is Higgsed by a characteristic F-theoretical player, a flux, to a flipped GUT model or the MSSM itself. They say that such a possibility doesn't exist in the heterotic model building which is true but, in my opinion, misleading because the heterotic models have other tools that play a similar role (the Wilson line symmetry breaking).

The symmetry breaking by the flux automatically solves the doublet-triplet splitting problem (the Higgses may come in incomplete multiplets, naturally without any triplets), explains the longevity of the proton, and even reproduces some qualitative features of the GUT light mass relations.

More shockingly, the singularity repels neutral fields and this fact actually leads to new exponential hierarchies where the exponent (!) is related to the ratio of the Planck and GUT scales or its powers (multiplied by a gauge coupling). Such a construction may create natural Dirac neutrino masses around 50 meV (plus minus half an order of magnitude). Another scenario shows that the heavy Majorana neutrino masses are around 10^{12} GeV (plus minus 1 or 2 orders of magnitude).

The models automatically come with a natural toolkit for a gauge-mediated supersymmetry breaking.

The comments above were the abstract with some clarifications. But 200-page papers surely have something beyond the abstract. ;-)

So what is the geometry? (See Jacques Distler's summary that you may or may not find more useful than the papers themselves.)

F-theory includes the singularities which are technically 7-branes of 9+1-dimensional type IIB theory, localized in 2 transverse spatial dimensions. To get a realistic model, they must become spacetime-filling branes in the real world, i.e. 3-branes. It means that the 7-branes must be compactified on a 4-manifold. The holomorphic structures must exist on this 4-manifold so it must actually be 2-complex-dimensional. After some analyses, they decided that it must be a del Pezzo (complex) surface. And dP_8 is the most general one - others can be obtained from dP_8 by shrinking its cycles. 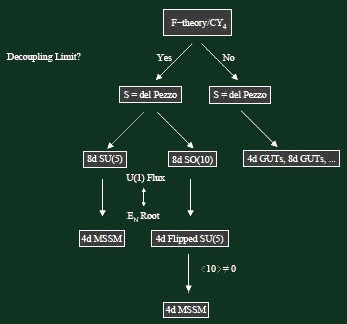 There is much more structure in it if the del Pezzo (decoupling) manifold is chosen. The extra dimensions play a role in the symmetry breaking. The size of the del Pezzo is at the GUT scale.

Note that the "complexity" of dP_8 is limited, finite, and rather small - another source of predictive power in this context.

But I still haven't said what kind of a singularity - what kind of a 7-brane - is wrapping the del Pezzo (complex) surface. It turns out that the rank of the gauge group on the brane is between 4 and 6. The minimal case, 4 with the SU(5) group, is already viable and a unique mechanism of symmetry breaking (via the flux) exists in this case; the choice of the U(1) group is unique as well.

They say that the construction can't have a heterotic dual because of a cohomology argument and Green-Schwarz-generated string-scale masses that are avoided in the F-theory picture.

So far, I simplified a bit. The 7-brane wrapped on the del Pezzo 4-cycle of the type IIB manifold carries the GUT gauge group but it is not the only one. There are other 7-branes. Their intersections with the GUT del Pezzo 7-brane has real codimension of 2. That's where additional fields live.

So the picture is that all fields of the GUT sector live somewhere on the (real) 4-dimensional del Pezzo (complex) surface but some fields such as fermions and Higgses live on (real) 2-manifolds i.e. Riemann surfaces inside the del Pezzo manifold. That's a rather simple geometry. You draw a well-known 4D geometry and 2-dimensional submanifolds in it carry particles. The only difference from the octopi is that it actually generates the right type of low-energy effective field theory. If this difference doesn't hurt, the octopus researchers should like the F-theory framework. ;-)

Now, you should remember that the F-theory GUTs are better than an ordinary GUTs so it preserves the beauties of GUTs but removes their warts. For example, the fermion representations are beautiful but the Higgses suck. So the F-theory GUTs keeps the complete representations for the fermions - they live on Riemann surfaces with a vanishing flux through them - while the Higgs multiplets break into pieces because they live on Riemann surfaces with a nonzero flux.

The proton decay is suppressed by "sequestering", if you wish: the up-Higgses and down-Higgses live on different, separated Riemann surfaces inside the del Pezzo manifold: the mu-term is then zero.

The symmetry-breaking flux also influences the masses of lighter generations: the similarity of the tau and bottom masses is preserved while the corresponding similarities for lighter generations are destroyed by changes of the wavefunction induced by the flux.

Dozens of pages are dedicated to realistic Yukawa couplings and mass patterns, mixing angles, etc. Eighty pages of appendices are dedicated to anomalies; surfaces inside CP^3; and classification of symmetry breaking patterns for various ranks.

Let me end up with some obvious comments about the accuracy of predictions. The theories describing particle physics use a lot of numerical parameters and many of them often have vastly different values. Dimensionless ratios are (or must be) frequently much smaller or much greater than one. We talk about hierarchies.

Whenever you want to understand hierarchies - places where the dimensional analysis breaks down - it is almost a rule that you must first understand it qualitatively - why the hierarchy exists at all. Later, you can make an order-of-magnitude estimate and finally, if you're lucky, you can be led to pretty accurate calculations. Every particular question or hierarchy is understood to some extent (or some accuracy) and it has its own criteria what kind of an explanation may be considered as progress.

The neutrino masses and other masses are much lower than the Planck scale (and some of them are even much lower than the electroweak scale). This fact has the potential to instantly falsify a lot of specific theories that would fail to generate this hierarchy. A theory or a model that qualitatively reproduces the hierarchy is as strongly supported as a theory in a different context that gives you a rather accurate prediction of a number that doesn't exhibit any significant hierarchy.

These general rules are pretty much universal across all of science and certainly in particle phenomenology including string phenomenology; the expected accuracy is, on the contrary, very non-universal and depends on the particular problem. There's a lot of "qualitative problems" - various types of hierarchy problems - where the discrepancy between the reality and the simplest calculations you might think about is most obvious and where the solutions or either unknown or look unsatisfactory. These are, in a sense, the most challenging problems to solve and many people, both in string and old-fashioned particle communities, dedicate a lot of time to the qualitative solutions of these problems. It clearly must be so.

The people who don't understand that this is how explanations and predictions evolve during the scientific process are complete idiots. I am always stunned how incredibly aggressive these idiots have become.

This particular one, Peter Woit, openly admits that he is even incapable to read non-trivial papers like this one - which is still orders of magnitude below the ability to actually contribute comparable insights. Still, he has the arrogance to flood the Internet with his worthless, misguided, and preconceived misconceptions about all such work and he can always find a lot of other simpletons who are eager to parrot his breathtaking ignorance.

Why are these things so common? Because their obnoxious community has almost no natural enemies these days. In the old days, someone would give this bottom of mankind a proper thrashing and the things would simply stop. Today, it is fashionable and politically correct to lick the musculus maximus of Peter Woit and similar populist excrementheads which is too bitter.