The Treaty of Lisbon is a document that has replaced the failed European Constitution. It avoids some of the common European symbols and similar superficial details but the essence is unchanged. It is designed as a step to change the European Union into one country, one nation. 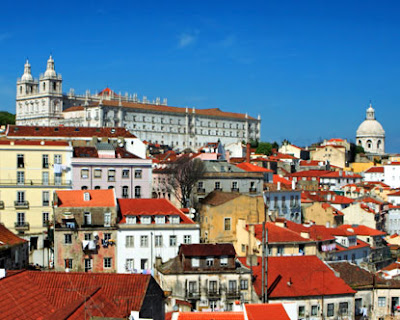 And it is not quite trivial to simply allow supernational laws to operate on your territory because there exist all kinds of other reasons why this shouldn't occur. Also, even if you were a eurofanatic, you can't just replace the national laws by the EU laws because the latter don't exist in many contexts and even if they did exist, the societies would not be ready for them.

Václav Klaus is recovering from his hip surgery. He was given an organ designed for young athletes which is appropriate, as his tennis partners could testify. ;-) The surgery went well but for a week, he didn't feel as well as expected.

For the Treaty of Lisbon to be activated, it must be approved by every single member nation among the 27 member countries. This "Yes^{27}" outcome is self-confidently expected by the officials in Brussels to materialize before the end of 2008.

Now, whether such a treaty is a good or bad thing is a very controversial question, so it not too exaggerated to say that the probability that each country says "Yes" is not excessively larger than 2^{-27} which is about 10^{-8}. Indeed, Ireland, the only country that holds a referendum, has rejected the treaty yesterday (53.4% "No" vs 46.6% "Yes"). 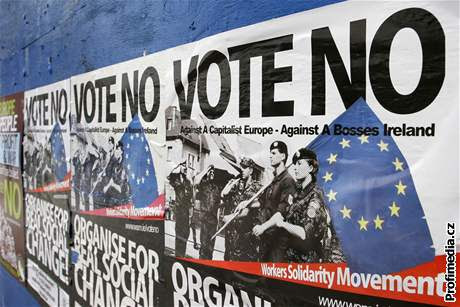 It is mostly the labor unions and similar institutions who protest against it: "No" dominated among poor people because the treaty is being associated with the "evil capitalists". A typical far-left "No" poster is above. It is not clear whether "poor" is quite the right word because Ireland's GDP per capita (PPP) exceeds that of the U.S. Anyway, these are clearly not the institutions I would normally support even though I tend to agree with their binary answer - another example of the huge anisotropy of the European politics. In Ireland, the treaty is an invention of the evil capitalists while in Czechia, it is mostly an invention of the social engineers. We are right, of course! ;-)

The Irish "social" logic is also paradoxical because the Irish prosperity is, to a large extent, due to rather consistent capitalist policies imported from the EU. ;-) But yes, they don't need any help anymore. Finally, there are also reasons to reject the treaty that I share with the typical "No" voters in Ireland, including a lack of democracy and the expected increase of taxes, and some of the No campaign commercials were very funny.

On Friday 13th, the champions of a unified European nation have a good reason to be superstitious. ;-)

Nevertheless, the EU is said to have no Plan B.

It sounds so unbelievable that I actually don't believe it. ;-) This proclamation is just a method to scare potential "No" voters. At any rate, there are more responsible, more realistic, and less arrogant politicians in Europe, too. As BBC tells us, Prague has a Plan B. More precisely, it is Plan C because we are already in the middle of Plan B for the European Constitution. Czechia will take over the EU presidency in H1 of 2009 - when the Lisbon treaty was supposed to begin - and the politicians debate the "No" outcome as carefully (and sometimes passionately) as they debate the "Yes" outcome - something that you would expect in democracy, anyway.

And be sure that the Plan C may be something else than the same EU constitution under yet another name. ;-)

A possible strategy of the eurofederalists may involve attempts to create a "hard core" of the EU that gets unified faster than others. But I am not quite sure where such eurofederalists come from and what countries they want to incorporate. If the new tighter union doesn't include France, the Netherlands, Ireland (3 no referenda), and probably Britain, I am not sure whether they should use the adjective "European".

If e.g. Merkel and Berlusconi manage to approve a closer union, why don't they call it The Axis instead of the EU? ;-)
Luboš Motl v 11:55 AM
Share