Off-topic: Sorry for the weekend silence. We went canoeing the "Berounka river" between Pilsen and Prague (see a camping map) from "Dolanský most" (Dolany Bridge) near "Chrást u Plzně" (124.6 km) to "Zvíkovec nad jezem" (81.8 km) with the Sat-Sun night at "Kobylka" (103.5 km). The total was 42.8 km of a beautiful landscape.

Commercial: Vote in our poll on the most serious threat for the global economy 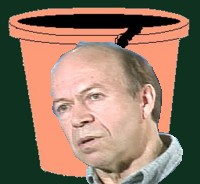 Exactly twenty years ago, on June 23rd, 1988, James Hansen gave one of the most notorious speeches that have led to the current irrational and pseudoscientific global warming hysteria.

See The Guardian, a left-wing British outlet
Search for "crime" in the 2008 Hansen's testimony and/or listen to Diane Rehm's somewhat senile interview with Hansen: "crimes against humanity" are discussed since 46:00

How does Hansen justify his plans?

"When you are in that kind of position, as the CEO of one the primary players who have been putting out misinformation even via organizations that affect what gets into school textbooks, then I think that's a crime."

Well, I doubt that outside North Korea, it is illegal to be an oil firm boss and to spread information about the climate. However, I think it is fraud and should be punished as such to fool millions of people in the rich world and extract tens of billions of dollars for low-quality pseudoscientific research and hundreds of billions of dollars for carbon indulgences, a frantically expanding gray sector of the economy.


James Hansen should be given a legal supervision that would prevent him from doing the things he's doing. I realize that this opinion may sound comparably exaggerated to Hansen's own words but when you start to see fringe pseudoscientists who not only want to use their subjective, sensationalist, and mad visions and personal interests to unseat all inconvenient CEOs and Congressmen - another explicitly formulated desire of Mr Hansen - but you also see that they seem to have a clique of misinformed or equally evil collaborators who have been partially successful, I am telling you: This is a damn serious situation that should be solved unless you want to repeat some truly black pages from the history.

Andrew Revkin interviewed James Hansen a few days ago. It's impressive how superficially sane the insane person is able to sound. ;-)

The global temperature has dropped, too. Because June 2008 is not yet over, let's talk about May. The middle troposphere, where the greenhouse warming should be most obvious, had the following temperature anomalies: in May 1988, it was +0.08 °C while in May 2008, it was -0.29 °C i.e. 0.37 °C cooler than 20 years ago. Qualitatively similar conclusions may be obtained from other teams besides UAH, too.

In the past two decades, a significantly linear (or even worrisome) global warming trend hasn't materialized but the expansion of the global warming hysteria has exceeded all sensible expectations. Nature hasn't worked well for an average physicist called James Hansen but he has begun to realize that the current political atmosphere is much more friendly to his fringe theories than the actual terrestrial atmosphere. Why? There's simply a lot of dopes and self-serving pseudointellectuals and quasi-preachers in the media, in the Academia, and in politics, too.

Because Nature isn't willing or capable to confirm Hansen's far-reaching speculations about a dangerous global warming, Hansen hopes that the judges will be more "bullish" with respect to his stock and they will help him to exponentially escalate the harassment of everyone who dares to say - or think - that James Hansen as a scientist and his kind of science has been a failure driven by sensationalism and political goals rather than a careful, objective, or sophisticated evaluation of the cold hard (and usually boring) data and the patterns they exhibit.

If you open the full text of Hansen's 1988 testimony, the last page includes a graph that indicates that the warming between 1988 and 2008 should be around 1 °C (scenarios A,B). In reality, it was close to zero. If you think that this is not an example of a completely falsified prediction, I would like to know how a falsification of a hypothesis that is a priori worth talking about could look like.

In certain qualitative discussions, one can simply see the quality of predictions. Open this image of

Would you say that the prediction back in 1988 was approximately correct or useful? Yes, Hansen is completely off the chart. I had to add a strip to the top of the original UAH chart. ;-) I don't think it's really essential to know whether his prediction overshot the warming trend by 350%, 850%, or whether he got the sign wrong. What matters is that his science has clearly been completely incompatible with reality.

Still, many people including politicians listen to this kibitzer. And I've concluded that it's not a scientific world. [Feynman 1974]

James Hansen has become a more effective speaker than before but he has become a worse scientist than ever.
Luboš Motl v 3:13 PM
Share