Nathan Berkovits: constructing a proof of the AdS/CFT correspondence 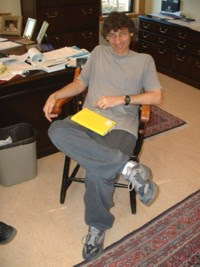 Nathan Berkovits wrote what I consider the most interesting paper (PDF) on hep-th today. It is nothing else than a perturbative proof of the AdS/CFT correspondence for the N=4 gauge theory and the AdS5 x S5 background of type IIB string theory.

Nathan Berkovits doesn't refer to Penrose's work but I think he should because Nathan's new paper is the most meaningful application of the concept of spin networks in physics.

Recall that Roger Penrose invented the spin networks in 1964 although it only got published in 1971. You have links that carry SU(2) spin "j" and that can be joined by vertices respecting the SU(2) symmetry, with the 3j-symbols entering as coefficients.

This is a somewhat cultural issue: particle physicists would refer to Ken Wilson all the time while general relativists would always talk about Roger Penrose. But it is true that Penrose invented spin networks years before Ken Wilson proposed Wilson lines (or loops) as a tool to study lattice QCD - that he also invented - in 1974.


It can be instantly seen that this idea is just a sleight-of-hand. Four-dimensional or higher-dimensional pure gravity simply has no bulk gauge field and any introduction of such a gauge field is artificial and cannot tell us anything correct about the dynamics. Spin networks in spacetime have clearly nothing to do with gravity even though some people fail to see this fact even after 25 years.

What is a spin network

The language of Wilson loops makes this story very transparent. A spin network is a collection of open Wilson lines connected by vertices in a gauge-invariant fashion. Recall that a Wilson line is a path-ordered exponential of the integral of a gauge field. If you integrate over a close contour, you obtain a gauge invariant operator.

The gauge field can be re-expressed with respect to any representation you want. You may attach the representation as a label to the open contour. For example, you may add a value of "j" to the link. In this fashion, you can create a lot of open links that transform as various representations under the gauge group at various points. 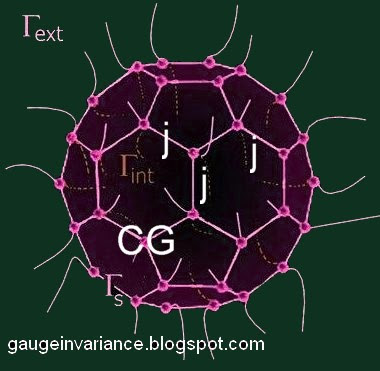 If the endpoints of the open Wilson lines coincide, you have a chance to contract them - and multiply by the appropriate Clebsch-Gordan coefficients - to obtain a singlet under the gauge group. Such a singlet - a functional of the gauge field - is a gauge-invariant operator. In loop quantum gravity, this function of the gauge field at t=0 has also been interpreted as a wave functional corresponding to a spin network "state" in the Hilbert space but it is not too important because it didn't work.

What spin network is used by Berkovits

Nathan doesn't consider a gauge field in spacetime but a gauge field on the worldsheet because the resulting spin network is supposed to become a Feynman diagram - a network of lines embedded in the worldsheet. Also, he doesn't want to use SU(2). Instead, he needs the full supergroup relevant for the most popular case of holography, namely PSU(2,2|4). Note that the supergroup also includes fermionic directions.

The worldsheet action of the topological model is simply

Here, the asterisk should be a bar, a complex conjugation on the worldsheet. Both the scalars "g" and the gauge field "A" live in the supergroup indicated. That's a rather unusual and simple way to define dynamics of the N=4 gauge theory, isn't it?

Naively, you may use the gauge symmetry to set "g=1". However, the action above has two parameters. The gauge coupling "e" should be taken to infinity at the end of calculations (the infrared limit). And the parameter "r", the radius of the anti de Sitter space, behaves as a mass term for "A". If the dimensionless radius "r" is small, new things (and holes of radius "1/(r.e)") can occur. It is impossible to set "g=1" in special regions.

Work to be done

It is not so far clear how the integrals over the off-shell momenta arise from the sums over singleton indices - I suppose that the representation theory of the supergroup should actually have a "momentum-like" continuous label for the irreps so they're not really singletons - but anyway, when the things are done properly, the sum over all spin networks should be equal to the calculation of gauge-invariant correlators in the worldvolume of the gauge theory (or scattering amplitudes in the AdS space).

But the whole framework sounds very intriguing, especially because it is almost identical to the strategy that I have wanted to realize for many years. A guess of mine that I still don't see in Nathan's strategy is the idea that the [thickened] location of the Wilson lines corresponds to loci on the worldsheet where you [almost] touch the boundary of the AdS space (at infinity). I am still convinced it is the case.

But I would like to say that this reappearance of the spin network is a nice new example of Joe Polchinski's dictum (page 21/33 here) that all good ideas are parts of string theory. You might like the idea of a spin network and be irritated that it hasn't appeared anywhere in string theory. When you choose the right group and the dimensionality of the worldvolume that is reproduced by the network - which must clearly be 2, not 4, in this case - you obtain a pretty new description of well-known theories that moreover explicitly proves Maldacena's correspondence.

Sergio Ceccotti and Ashoke Sen wrote a paper about the Bagger-Lambert-Gustavsson theory, arguing that you get the right positively-definite moduli space on the Coulomb branch. Yesterday, there was a paper that indicated that the BLG Lagrangian could be just an unusual way to rewrite the super Yang-Mills theory and there is no new physics in it: the equivalence could be perfect which would be bad news.

But they also indicated that the conformal point of the M2-brane theory could be captured in a Princeton preprint from the day before yesterday. ;-) One more interesting fact: The 2006 paper by Bagger and Lambert, dedicated to the memory of Andrew Chamblin, has surpassed the point of 50 citations. Congratulations.
Luboš Motl v 6:56 AM
Share