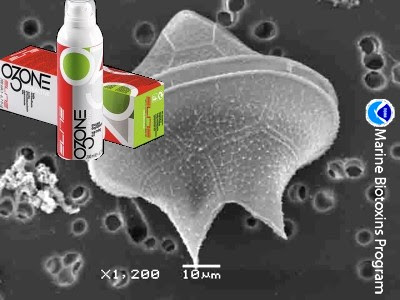 Dr Katie Read and fifteen mostly U.K. and U.S. co-authors have studied the mechanisms destroying ozone (O₃) in the lower atmosphere above the ocean:

Recall that ozone in the lower atmosphere is a highly potent greenhouse gas. Despite its small amount, it is responsible for almost 2/3 of the effect we attribute to CO₂. (The absolute size of the effect remains uncertain, mostly due to unknown feedbacks, but most of these feedbacks are universal multiplicative factors for all greenhouse gases.) When you divide the "shared absorption" in between the overlapping different gases, the percentages of the total greenhouse effect are as follows (source):
Water itself would be able to cause a much higher percentage of the effect than 67% but some of the spectral lines are absorbed - and attributed to - the competitors. At any rate, you see that O₃ and CH₄, when added together, are almost as important as CO₂, so we should care about them. 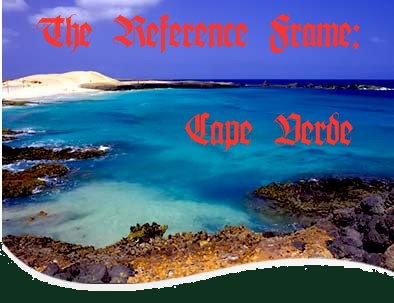 There are all kinds of processes that create and destroy ozone. Dr Katie Read et al., the authors of the present peer-reviewed paper, spectroscopically observed the gases at the Cape Verde Observatory (Atlantic Ocean islands, 500 miles West from Senegal in West Africa).

See also: Other lab problems facing the mainstream theory of the ozone cycle

They found out that phytoplankton apparently creates a lot bromine monoxide and iodine monoxide. These compounds subsequently destroy a lot of ozone and lead to additional products that destroy some methane, too.

The existing conventional mainstream models of Earth's chemistry completely neglect halogens (Fl, Cl, Br, I, At). That's why they end up with a wrong figure expressing how much ozone is destroyed above the ocean - i.e. a wrong figure for the concentration of an important greenhouse gas. The authors decide that the actual amount of ozone destroyed in this way is 50% higher than the models would lead you to believe.

I want to say that the rates of the (halogen-dominated) reactions they are proposing to explain the spectroscopic observations are generally increased by man-made (or other) CO₂ production and by "global warming". Remember that e.g. coccolithophores, a brand of phytoplankton, thrive when the CO₂ levels increase. Also, higher temperatures lead (or would lead) to increased water vapor above the ocean that helps the halogen oxides to escape from the ocean. All these relationships are examples of Le Chatelier's principle i.e. Nature's natural ability to self-regulate. Negative feedbacks always win at the end.

A pseudoscientific reaction from RealClimate.ORG

RealClimate.ORG's Gavin Schmidt clearly doesn't like the fact that the findings show another mildly serious problem with the contemporary climate models. So he spreads some fog. The most breathtaking demonstration of his incompetence (or zeal) is the following quote:

... Yet this is completely misleading since neither climate sensitivity nor CO₂ driven future warming will be at all affected by any revisions in ozone chemistry - mainly for the reason that most climate models don't consider ozone chemistry at all. Precisely zero of the IPCC AR4 model simulations (discussed here for instance) used an interactive ozone module in doing the projections into the future.

Wow! He seems to be so proud that their models neglect virtually everything. So if a mechanism happens to destroy another greenhouse gas that is as important as CO₂, partially as a result of the presence of CO₂ itself, the sensitivity will not be affected "at all"! Who could have thought? Has Mr Schmidt ever heard of feedbacks? Or does he think that there is no interaction (or causal relationship) between the concentration of different chemical compounds (and between temperature, too)? Has he ever heard of the so-called chemical reactions?

What he says is so flagrant denial of basics of science that I believe that most people who have heard some science at the elementary school will know what's wrong with his opinions.

Political activists like him love to talk about positive feedbacks all the time - especially the production of water vapor indirectly caused by CO₂-induced warming - but when it comes to negative feedbacks such as the destruction of other greenhouse gases such as O₃ and CH₄, they shouldn't be looked at "at all"! Is it what you call science and how you want to obtain correct (...) answers, Mr Schmidt? I am stunned.

Precisely zero of the IPCC AR4 model simulations (discussed here for instance) used an interactive ozone module in doing the projections into the future.

implies that you should now throw precisely all IPCC AR4 models to the trash bin or, to say the same thing more moderately, to work very hard to correct the bug and to introduce the previously neglected important effect that was pointed out by Dr Katie Read et al.

Many similar problems with the models have been found in the past and many more will be found in the future. Science listens - and has to listen - to all these new insights, otherwise it would be no science and it could make no progress. Looking at new data and insights and the elimination (or adjustment) of existing theories is what scientists are really paid for.

Mr Schmidt's own attitude to the error-correcting procedures is clarified by the last sentence of his text:

But it seems that the "climate models will have to be adjusted" meme is just too good not to use - regardless of the context.

So Mr Schmidt finds error correction in science too good and prefers not to use it and not to correct errors in the climate models. In fact, he even prefers not to talk about adjustments at all because it could indicate that science and models are not the infallible and eternally valid verses from the Holy Scripture that he knows, believes, and uses to evangelize. Instead, they could become temporary insights that could be influenced (or even refuted!?) by every new observation or a new scientific paper - and that would be nothing short of hell! :-)

I happen to use the word "science" for this "hell".

Well, this approach of Mr Schmidt might be one of the reasons why his personal opinions about the climate and the opinions of his comrades at RealClimate.ORG are scientifically worthless piles of crap. The more science will know about Nature, the more crappy the opinions of similar zealots who are not ready to adjust their opinions will be. If you try to quantify how much this particular paper changes the numbers relevant for the climate sensitivity, it is fair to say that 5-10 papers like that are able to change the numbers by something of order 100%. In a year or two, our understanding may be very different if we're doing things right. It's therefore damn important for climate science to (critically) read and (rationally) process such papers!

People like Schmidt are neither willing nor able to correct mistakes in their models and theories. Fortunately for them and unfortunately for the society, they are being paid for something completely different - for a blind promotion of wrong theories and politically convenient conclusions that are irrationally extracted from these wrong, never-updated, obsolete theories.