Risks for the economy: a poll 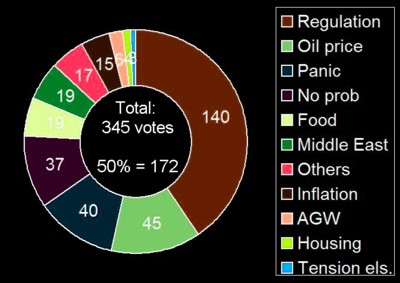 In the list above, the answers are sorted from the most successful ones (in the graph, they are ordered clockwise).

40% thought that regulation in general and/or climate alarmism in particular is the most serious risk. Together with 12% for panic and speculation, we have a majority that thinks that socially engineered, political, or psychological policies in the name of a better life of the society (or individuals) ;-) are the most serious threat.


13% thought that the oil price is the most dangerous thing. Food prices are scary for 5% and general inflation for 4% of the voters. Tension in the Middle East tops the list of 5% of the readers (eighteen percent when combined with the oil price worries). Climate change, tensions elsewhere, and housing slump have at most 2% each.

11% decided that no problems are serious enough to be worried about and 5% offered alternative top problems in the comments. 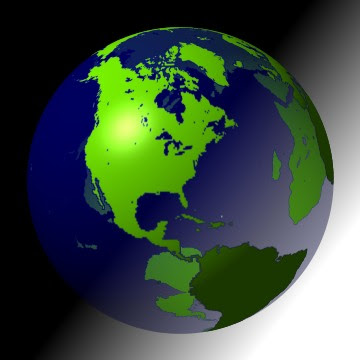 The oil price seems to be getting out of control and a blame game has begun.

Many people, including most producers in the OPEC countries, claim that speculators and hedge funds are behind the increase and regulation of oil futures in the U.S. - and nine bills have been proposed - could slash the prices back to something like USD 65 within a month.

The U.S. housing prices dropped by a record amount - about 15% from the month 1 year earlier. In Miami and Las Vegas, the drop is around 27%. A continuation of this process or its export to other countries may bring all kinds of problems.

Israel has performed an air exercise that looked like a training to attack Iran.

John Bolton claims that Israel will attack the nuclear and other facilities after Obama is elected but before he is inaugurated, assuming that it is Obama who wins.

Food prices have risen and they may continue to do so. Other prices also seem to be rising and inflation in developed countries is returning to high levels unseen in many years.

The climate in 2008 seems roughly 0.5 °C warmer than 100 years ago. Children cannot run because of global warming. ;-) Some people think that we will be fried soon. A naive 10-year-old boy was named the best kid philosopher in the U.S. because he wrote the poem "I am Earth and I am dying, my blue ice caps are melting; will you help me?".

Other people think that the attempts to regulate carbon emissions could hurt the economy. Please, vote for the "regulation" answer even if you are worried about other kinds of regulation!

People react irrationally - i.e. the U.S. consumer confidence at the new record low could be just a sign of panic - while speculators try to benefit and expand all kinds of bubbles and bandwagons.

Which of these issues do you consider to be the most serious threat to the world economy?


Besides the poll that will expire on Friday, I am interested in your detailed opinions and predictions.
Luboš Motl v 8:00 AM
Share